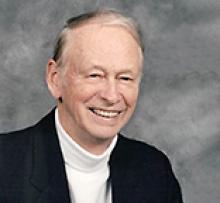 With sadness we announce the death of our Dad (Gramps) passing peacefully on
November 16, 2021 at the age of 94.
He will be sadly missed and lovingly
remembered by his wife Nell; daughter
Cindy, grandchildren, Katie and Bryce, son Jeff and wife Hali, grandchildren, Riley, Cole, and Elizabeth.
Jack spent his childhood on his parent's (Jessie Mae and Earl Roy) farm near Grandview, Manitoba then moved to
Winnipeg after his father's early passing. He boarded at St. John's School until graduation then moved to the Fort Rouge area where he met his life-long friends, Cliff, Jackie, Wray and Audrey, and a "great gal" named Nell. Nell became the love of his life and they were married on April 4, 1953.
After graduation Dad became a journeyman electrician working for a few electrical supply companies in Winnipeg. He then moved on to work for CBC television for over 35 years, first as a lighting technician then as a technical producer. He took great pride in broadcasting many live musical and sporting events, including the Olympics, Commonwealth games, CFL and curling.
In 1960, Dad and Mom purchased a lot at Caddy Lake to spend the summer with family and friends. As kids and grandchildren came, the ever-expanding cabin was enjoyed for decades. The entire cabin was built by Dad, he was definitely a "Jack" of all trades. He even built a boat with good friends, Don and Marion, and called it "Good Enough" even though it performed exceptionally. Dad spent countless hours towing the kids and their friends behind the boat and never refused a request to "go for a ski". Dad was also a great waterskier in his own right. In the evenings Dad could be found playing cards and
enjoying a rum and coke with many of the great friends he had at the lake.
Dad could always be relied on to help with renovations or handyman jobs for his
children and was always lending a hand with the neighbours at the lake. It was not
uncommon to see Dad working on the roof or tuning a boat motor, well into his 80's.
Dad and Mom operated as a team and were joined at the hip for 68 years, supporting each other in all of their endeavours. Dad loved the game of curling and played mainly at the Fort Rouge curling club where he introduced his children to the sport. Dad and Mom never seemed to miss a game that Cindy, Jeff or the grandchildren played, whether in Winnipeg or across Canada. They especially enjoyed any post-game festivities with Don and
Phyllis.
Jack (Dad, Gramps) was a loving husband, caring and supportive father, grandfather and friend to many, he will be missed.
A Celebration of Life will take place in the spring, details will be announced at a later date.
The family would like to thank the staff of West Park Manor (1 North) for taking such good care of Dad.
In lieu of flowers the family requests that donations be made to the Alzheimer
Association of Manitoba (https://alzheimer.mb.ca/you-can-help/donate/)