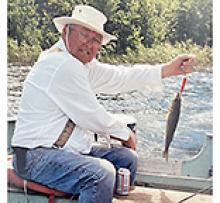 Peacefully, on November 12, 2021, following a brief illness, Ernie (Papa) passed away, with his daughters at his side, at 85 years of age.
Left to cherish his memory are his daughters, Mona (Jerry) Allen of Eriksdale and Lisa Miller (Gerald Falk) of Ashern; his grandchildren, Meaghan (Aaron) Allen, Trista (Lyndon) Miller, Chelsey (Owen) Miller and Andrew (Kristy) Miller; great-grandchildren, Shaemus, Izabella and Sophie, Brittan and Ayla; his brothers, Pete, Fred, Beverly (Vicki) and Rob (Bette); sister Suinn (Ron) and in-laws, Wanda Johnson, Karen Johnson, Gary Shapiro, Thomas Bent and Al and Sandra Jira, along with so many nieces, nephews and cousins too numerous to list.
Ernie was predeceased by his wife Shirley, of 41 years in 2004; his parents, Peter and Freda; brothers, Brian and Danny; sisters, Thora, Mona, Nona, Sandra and Rosalee; in-laws, Marg, Leona, Evelyn, Ken, Marvin, Paul and John; his parents-in-law, Lawrence and Hilda Jira, and sister-in-law Elaine.
Ernie was born October 8, 1936 in Winnipegosis, Manitoba, where he grew up, attended school, and first met the love of his life, Shirley Jira. He started working for Manitoba Hydro in 1956 and was stationed all over the province. In 1963, he married Shirley and they settled first in Steinbach and then Falcon Lake where they started their family.
The family moved to Lynn Lake in 1979 when Ernie took the position of District Operator. While there he was heavily involved in the community with Kinsmen, old-timer hockey, volunteer firefighter, refereeing minor hockey and more. He really enjoyed fishing, taking the family out often in the boat, and of course moose hunting with Fred, Rob and Matt.
In 1979, another move, this time to Ashern, also as District Operator, getting the nickname "Ernie the enforcer". Again he was involved in the fire department becoming Deputy Chief. Papa really enjoyed refereeing minor hockey and was one of the oldest and longest serving refs at the age of 70. While the moose hunting eventually became replaced by elk and deer, he enjoyed fishing until the last couple years.
While with Hydro he took some temporary positions in Winnipeg and Selkirk and eventually became the Manager of the Interlake area. Papa retired in 1993 after a long career with Hydro. After retirement he and Shirley enjoyed travelling all over North America and creating crafts which turned into a small business that kept them busy.
A celebration of Papa's life will be held next summer, the date to be determined later.
The family would like to thank the staff at Ashern Hospital for your care of Papa these last couple weeks. We also appreciated all the visits and calls from family and friends.