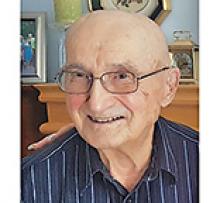 Peacefully on November 13, 2021, at St. Boniface Hospital, surrounded by family, John Roskos passed at the age of 92.
John is survived by his wife Victoria, sons, Darrell (Debbie), Craig (Mary-Lynn) and Jonothon (Christine), as well his grandchildren, Cory, Stephanie, Brett, Abbey, Chelsea, Logan, Chloe and great-grandson Kyson. He was predeceased by his parents, John and Anna, his sisters, Anne and Ruby. He is survived by his sisters, Fanny and Leda.
John was born in Presov, Czechoslovakia and came to Canada with his parents and sister Anne at the age of six months. The family settled in Dufresne, MB, where his father started a farm operation that still exists today. On September 27 1958, John married Vicki, and they settled in Winnipeg.
John started his career in 1951 as a porter on the CPR passenger train line. In 1963, after his father suffered health issues, John and Vicki moved to Dufresne to continue the family farm operation while at the same time continuing to work at CPR. John retired from the railway 35 years later as a Service Manager with Via Rail during which time he continued to expand his farm operation.
John was very active in the agriculture industry having served on various boards and associations including his regional Manitoba Pool Elevator association, Manitoba Canola Growers and Keystone Agriculture Producers to name a few. John retired from farming in 2002.
Upon retirement, John and Vicki moved to Winnipeg spending time with family and friends while going on excursions to various casinos in Manitoba and the U.S.
The family wishes to extend thanks to the staff and caregivers at St. Boniface Hospital for making his last few days comfortable.
A funeral service will be held at 2:00 p.m. on Friday, November 26, 2021 at Green Acres Funeral Home & Cemetery, Hwy. #1 East at Navin Road, Winnipeg, MB. Masks are mandatory and guests will be required to provide proof of being fully vaccinated.
The service may be joined virtually by accessing the website www.greenacresfuneralhome.com, search for John's obituary under "RECENT OBITUARIES", click on his name and then scroll down to the "SERVICES" section under the obituary, then click on the "JOIN LIVESTREAM" link.