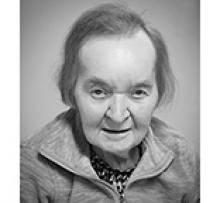 Our dear mother, Zdenka Nikolic, passed away on November 17, 2021, at the age of 88 after struggling with congestive heart failure for several years.
Left to mourn are brother Pepik, daughter Zdenka (Donald), son Vladimir (Helena), as well as two grandchildren and five great-grandchildren. She was predeceased by her husband Vladimir in 2006.
Born in Prague, Czechoslovakia, she came to Canada in 1969 with Vladimir and their daughter. At that time, Vladimir Jr. chose to stay back in Prague. Settling in Winnipeg, Zdenka and Vladimir embraced their new life in Canada. Vladimir found employment almost immediately as a machinist at Versatile Manufacturing, while Zdenka went to school to learn English and then worked at a variety of jobs.
Thanks to their hard work and perseverance, they proudly purchased a brand new house in St. James just two years after arriving in Canada. In their spare time, they kept busy making improvements to the house, looking after their large garden, and taking many trips to the Whiteshell.
In 1979, they moved to Port Coquitlam, BC where they enjoyed the mild climate and even more extensive gardening projects. In 1982, Zdenka and Vladimir were overjoyed when the family was reunited as Vladimir Jr. moved to Canada with his wife and two young children.
Once Vladimir retired, he and Zdenka moved to Westbank in the Okanagan where their gardening hobby expanded to growing fruit trees as well as a variety of flowers and vegetables.
After Vladimir passed away, Zdenka moved to Coquitlam and then back to Winnipeg in 2014. She spent seven years at the Seine River Retirement Residence where she enjoyed the warm sense of community as well as many activities, especially art class, circle of friends, and book club.
This year, her congestive heart failure progressed to a severe stage and after several lengthy hospital stays, she moved to the Poseidon Care Centre where she spent the past three months. Thank you to the nurses, health care aides and other staff on the 5th floor who demonstrated great kindness and compassion to Zdenka.
Also many thanks to Parusia Purohit, NP and pharmacist Chris Mendoza for the excellent care they provided Zdenka over the past several years.
In lieu of flowers, donations can be made to Zdenka's favourite charity Doctors Without Borders/Médecins Sans Frontières or an organization of your choice.