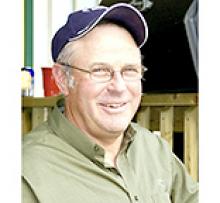 After a short battle with cancer, peacefully on the family farm, it is with heavy hearts that we announce the passing of Gary Tait.
He is survived by his wife Donna, children, Lindsey (Michael Hoas), Kelly (Ben Holtmann), Glen (Kaitlyn Cowie), Clayton (Kassidy Martin) and grandchildren, Brooks, Blye, and June. Gary was predeceased by his parents, Pat and Myrtle Tait. Special cousin to Elaine Ainsley and many other cousins across Canada.
Gary was born and raised in Warren, Manitoba on the family farm. As a young farmer, he and his father Pat travelled across Canada by rail car showing cattle and winning many awards including the Toronto Royal Winter Fair. Gary and his parents grew grain and raised livestock for many years right in the heart of Warren. As his operation grew, he relocated a mile north of Warren to continue farming with his wife Donna. He continued to farm cattle until 1988, after selling his herd, his sole focus became his grain operation. Even after his diagnosis he was quite active in his role on the farm. Seeding, spraying and harvest was completed under his watchful eye and you could count on him noticing something out of place. As Glen and Clay took on more responsibilities on the farm, Gary was always the combine operator. After 61 years of farming Gary spent every day of his final harvest driving the combine.
In his younger days, when he wasn't farming he could be found playing baseball with the Grosse Isle Blue Jays or playing hockey for the Warren Mercurys. Gary was inducted into the Manitoba Baseball Hall of Fame with his team the Grosse Isle Blue Jays 1988 to 1993 (2012) and Warren Senior Team of 1974 to 1979 (2018). He took pride in using his hockey knowledge to coach several of the boy's hockey teams. Gary's passion of sports was evident when he disagreed with a ref/umpire. He was always able to make sure his opinion on the call was heard by everyone in the venue, sometimes resulting in an early exit to the game.
If Gary's truck wasn't in the yard, chances are he could be found at one of several different local coffee shops. We could check the time and would know which coffee shop to call if we needed to get a hold of him. It was noted that the kids always knew the rumble of the truck rounding the corner as he would return home.
Gary will be missed by all, at his request there will be no funeral service. A private gathering will be determined at later date.
The family would like to thank family and friends for their support. A special thanks to Dr. MacMillan, Rhonda May, Dr. Graham, Christine (palliative care), Jo-Anne Procter, Hermann Hueging and Gary's coffee shop friends for checking in on him.
In lieu of flowers, please consider a donation to the Warren Arena (South Interlake Rec Centre, Box 468, Warren, MB R0C 3E0) or Warren United Church (Box 324, Warren, MB R0C 3E0).