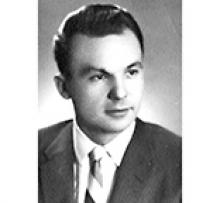 Frank "Frankush" Penkalla passed away on November 18, 2021, at the age of 92.
Despite an early life which saw him conscripted as a soldier in the Second World War at the young age of 16, Frank came out of that experience bruised but not broken and stayed strong until the end.
As an adult, he moved to Canada and fulfilled his goal to open a business as an electrician.
Frank met the love of his life, Vilemini, while she was a nurse caring for him as a patient in the hospital. It was love at first sight, and she supported his business efforts every step of the way.
Together they shared a cottage and many good times with family and friends fishing, playing cards, blueberry picking, and roasting marshmallows.
Frank will be remembered for his tough exterior, which when cracked showed a man filled with great love for those close to him. He had a cunning wit. I will miss the glint in his eye and the raise of his eyebrow when that mischievous side of him came out.
To his sister Joanna and to me, his niece, uncle Frank will be remembered best for his fearlessness, his resilience, and the care he took of those he loved. We are better for having known him.