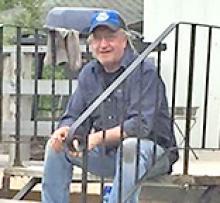 On November 10, 2021, Robert Grant "Butch" Everatt passed away.
He was born on March 5, 1954 in Ashern, MB. He was the oldest child of Harry and Edythe Everatt and a brother to Albert and Barb.
He attended Lord Roberts School and Churchill High School. He became an apprentice Motor Vehicle Mechanic at MTS. Working in the Mechanical Automatic Industry his entire career, retiring at Murray Chevrolet. His passion for vehicles was both hobby and livelihood.
As an avid Blue Bomber fan, he showed his support by never missing a game in 35 years. Go Blue Go.
He enjoyed sharing his jokes with family and friends and said that he had a "million of them".
He is survived by his sons, Robert Kenneth Everatt, Billy Joe Grant Everatt, Gage Adam Everatt and Cole Rene Everatt (Audrey); grandchildren, Ariel, Lily and C.J.; a sister Barb Yanke; nieces, Erin and Heather and their families and niece Nikki Stevenson and family.
He was predeceased by his father and mother, brother Albert and brother-in-law Barry Yanke, along with other family members.
There will be a Celebration of Life at a later date.
Flowers are gratefully declined. If you wish, a donation in Dad's memory could be made to the Canadian Angelman Syndrome Society, PO Box 31092 Namao Centre, Edmonton, AB T5Z 3P3 or to CancerCare Manitoba Foundation Inc., 675 McDermot Ave., Room ON 1160, Winnipeg, MB R3E 0V9.