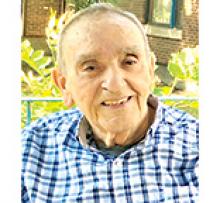 Lucien (Lou) Joyal passed away peacefully on November 17, 2021, two days after his 93rd birthday.
Lucien was a wonderful husband, father, and grandfather, and will be deeply missed by his wife Joan, his daughter Lisa, his son-in-law Jeff, and his granddaughters, Maya and Rhea. He will also be lovingly remembered by his brother Ed (Eileen), his sister Louise, his nieces, nephews, and many other family members and friends.
Lucien tried his best to make a difference in his community through his years of work and service as a member of various organizations, including the Royal Canadian Air Force, Canadian Aviation Electronics, Yukon's United Keno Hill Mines, Edmonton's Sparling Davis Construction, Manitoba Wheat Pool Elevators, the Manitoba Power Commission, the CBC, and Red River Community College.
However, he will be best remembered for his love of life. He believed humour and laughter were some of life's greatest medicines, and he used positivity and optimism to persevere through even the darkest of times. He had an endlessly curious mind, and constantly loved to learn. He cherished his family and friends.
Lucien's family gives special thanks to all the staff at the Fred Douglas Lodge, who provided outstanding and unwavering care for Lucien over the past few years.
The family has held a memorial service in celebration and in honour of Lucien's life.
If friends so desire, donations may be made to the Alzheimer's Society of Canada.