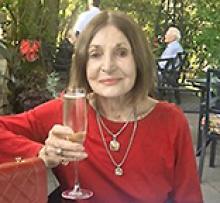 A woman of remarkable elegance, beauty and grace, Irena Kankova-Cohen passed away on Thursday, November 4, 2021 at the wonderful age of 94 years.
Born into an aristocratic Czech family on June 24, 1927, Irena was fiercely proud of her European heritage, right up until her last days. An intellectual, she took courses at the Sorbonne in Paris and later attended Charles University in Prague as a philosophy student. While there, she became friends with a group of young classmates ardently opposed to the postwar Communist government. As a result, the Czech secret police showed up at her parents' house and told Irena that she would be arrested if she didn't report to them weekly on the meetings of her friends. Rather than do this, she decided to escape and did so at the age of 23, leaving her parents behind never knowing if she would see them again. Sadly, she never saw her father Eduard again although her mother, also named Irena, was allowed to emigrate to Canada in 1964 and lived in Winnipeg until her passing in 1977. Mom arrived in what was then West Germany after crossing mountains, rivers and streams by herself and identifying herself to American troops stationed at the border.
Through the international YWCA, Irena was offered a job in Canada, after spending time in a refugee camp in West Germany as a translator. She crossed the Atlantic and arrived in Halifax on the General Hersey and was told her train ticket would take her as far as Winnipeg, which she was told was "the Paris of the West!"
When she arrived in Canada, several major US and Canadian newspapers featured the remarkable story of the young girl who had escaped Communist Czechoslovakia. Not knowing that these newspaper articles were obtained by Czech authorities, this publicity came back to haunt her when she narrowly escaped being arrested during a visit back to Czechoslovakia in 1961.
The August long weekend in 1951 changed her life forever, as it was in Clear Lake, Manitoba that she met her Albert, who was there with a group of his friends. They began courting and were married in November 1953 in Johnstown, Pennsylvania by a reform rabbi who was willing to marry a Roman Catholic and a Jew. Despite many saying their mixed marriage would never last, they remained together for 58 years up to Albert's passing in November 2011. Dad always gave Mom credit for pushing him to book their round-the-world honeymoon in 1954, which made the local newspapers and directly led to Albert meeting the founders of the Sony Corporation in Japan. Of course, that's a whole other legendary story in itself!
An actress and dancer in Prague, Mom found work in Winnipeg with the Manitoba Theatre Centre and performed lead roles in the Diary of Anne Frank, Anastasia and Gigi, as well as numerous acting jobs with CBC Radio and Rainbow Stage over her years of performing.
Mom was a lover of natural beauty, as well as the artistic dynamism of large cities and was fortunate to have travelled to many countries including France, Italy, Germany, Switzerland, Austria, Portugal, Spain, Croatia, Slovenia, United Kingdom, United States, Mexico, Jamaica, Japan, India and Tunisia.
Bermuda was her special place and her annual January trips there became a tradition, where she was beloved by the hotel staff at the Fairmont Southampton Princess and was greeted every year with a huge hug from the employees.
Travel came easy to Mom, as she spoke five languages fluently (English, French, German, Czech and Latin) and could get by in several others quite comfortably.
Irena was a longtime board member of Canada's Royal Winnipeg Ballet and a proud member of its Honorary Council, the National Ballet of Canada board, while also serving on the campaign cabinet for St. John's Ravenscourt School's Soaring to New Heights capital campaign in the mid 1980s.
Mom was also a very competent tennis player, as a longtime member of Taylor Tennis (when it was known as Unicity Racquet Club). She enjoyed many years of golfing as an honorary lifetime member of Glendale Golf and Country Club; as well as being a longstanding member of the Winnipeg Winter Club and Manitoba Club. She also took ballet classes at the Royal Winnipeg Ballet well into her 60s and modelled in fashion shows at the iconic downtown Winnipeg Hudson's Bay and Eaton's department stores.
Mom is survived by her children, Anthony (Anita), James (Linda) and Anna-Lisa (Mike) as well as being Nana to her adored grandchildren, Shae-Lynn, Athena, Jaden and Stella. She was also predeceased by her little sister Olinka when she was 14 years old. In the Czech Republic, she leaves her dear cousin Karel (Bozena) and their daughter Irena (Milos), their daughter Anicka as well as her second cousin Vojta (Jana) and their daughter Irenka.
The family would like to thank the many people who looked after our Mom, including Dr. Michael Eleff, Dr. Evan Orlikow and doctor assistant Fern Wasney, Dr. Felix Sikora and doctor assistant Michelle Balancio, caregiver Sheila Cua, Brandi Bhullar and the kind staff at the Shaftesbury Retirement Residence, as well as her longtime housekeeper Almerinda Afonso and her daughter Melissa.
Please feel free to make any donations in Mom's memory to Siloam Mission, the Salvation Army, Royal Manitoba Theatre Centre or Canada's Royal Winnipeg Ballet.
Mom, Nana, we feel incredibly thankful and privileged to have had you in our lives. We will always remember the amazing trips, adventures and laughs we shared and hold you close within our hearts forever.
Cremation has taken place and remains will be interred at the family crypt in Benešov, Czech Republic, as well as St. Boniface Cathedral Cemetery in Winnipeg.