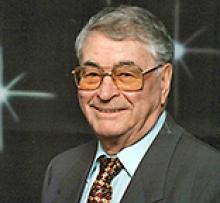 With heavy hearts, we announce that Ralph's well-lived life came to a peaceful close at home on November 13, 2021 at the age of 97 years.
He is predeceased by wife Muriel; as well as sisters, Jean (Bill), and Myrtle. He is survived by brother Ron (Linda); children, Victor (Debbie), Dan (Katrina), and Tracy Stahl; grandchildren, Daniel (Darcie), Cody (Hannah), Troi (Dave), Tyler, and Jolynn (Ryan); as well as his five great-grandchildren.
Ralph was born and raised in Austin, Manitoba. He joined his comrades in the Second World War at 19 years old. This is where he learned to ride a motorcycle. When he returned, he began a 36 year career with MTS as a groundman in McGregor. During one of his postings, he met Muriel Austin, from Strathclair, and after letters back and forth, they married August 1, 1953, and settled in Dauphin. Ralph continued with MTS in Dauphin as an Area Manager. He moved his family to Winnipeg in 1961, and continued with MTS where at retirement he was an Engineering Supervisor. Ralph filled his 37 years of retirement with motorcycle riding (until his 90th birthday), racquetball, x-country skiing, curling at Pembina Curling Club and golfing at Canoe Club, Transcona Golf Club, and numerous winter trips to Texas to work on his golf game. Ralph had five hole-in-one awards, as well as other trophies attesting to the effectiveness of the "down south" golf practise he and Muriel enjoyed.
The Hotel family kindly requests that friends and relatives take a few minutes to honour his memory by visiting his tribute page at EthicalDeathCare.com. A photo-biography, as well as memories and stories published by those who knew him, are available there.
In accordance with Ralph's wishes, cremation has taken place and no formal service will be held.