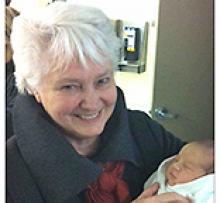 Gladys passed peacefully on November 18, 2021 with her husband at her side.
She was raised on the family farm near Dugald, MB, to Bernard W. Hayward and M. Elizabeth (Beth) Hayward. She is survived by her husband Peter; her sons, Sean (Melissa), Marc (Athena), and Matthew (Emily); and her siblings, Jean (Bill), May Ann (Eric) and John (Cindy). Her seven grandchildren, Abby, Carter, Dominic, Carys, Emily, Hudson, and Charlotte - brought great joy to her life.
Gladys attended Dugald School for her elementary education and Springfield Collegiate for her secondary schooling. Her chosen profession was physiotherapy, and she graduated with a Diploma of Physical Therapy from the University of Manitoba in 1974. She did her residency at a hospital in St John's, Newfoundland, and took a permanent position at the Royal Ottawa Hospital. It was there, in Ottawa, that she met Peter, who was convalescing from a skiing injury. They married in January 1978 and moved to Winnipeg in June of that year.
In 1978, they flew to Whitehorse and paddled by canoe down the Yukon River to Dawson City in an extended vacation. Following a train ride from Whitehorse to Skagway, Alaska, they rode a ferry to Vancouver Island. They worked their way back to Winnipeg by bus and train and purchased a home in the Wolseley area of Winnipeg. Peter pursued an engineering degree at the University of Manitoba, and Gladys continued her career as a physiotherapist at the Health Sciences Centre.
They decided to build a home in the RM of Springfield and settled on a property close to the Hayward family home. They moved into their newly constructed house in January 1986. As the family expanded, Gladys became a stay-at-home mom and later home-schooled the three boys for a few years. As the boys entered the public school system, Gladys became active in Peter's business as an office manager/administrator and brought some order to the company.
Eventually, the call to return to her chosen career, physiotherapy, could no longer be resisted, so she enrolled in a bachelor's program at the University of Manitoba as her diploma was no longer accepted. She graduated in 2006 with a Bachelor of Physical Therapy and subsequently employed at Concordia Hospital as a physiotherapist until 2018.
In her resume, she lists "democracy" as one of her interests. She was proud of her father and his involvement in the Second World War as an RAF pilot. She was honoured to be a member of the Dugald community and was engaged in various community organizations. Her interest in democracy led her to a position as a constituency assistant to the MLA in 2004. She was a school trustee between 2006 and 2014. She was a volunteer involved in bringing to fruition, a 47-unit residential co-op for seniors in Dugald. In 2012 she received the Queen's Jubilee Medal in recognition of her community work.
Cremation has taken place. The immediate family will gather to remember her, and a memorial service is planned for the spring where the community, friends, and extended family can pay their respects.
The family would like to express their thanks for the health care professionals in the St. Boniface Hospital that treated her with respect and care in her final days.