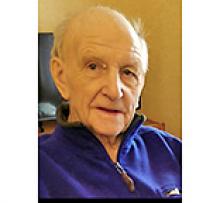 Tom passed away peacefully in his sleep at 2:40 p.m., on Wednesday, November 24, 2021 at the Red River Extendicare Home in Selkirk, MB. Tom was born April 17, 1932 in Drumslade Rd, Coleraine, County London Derry, Northern Ireland.
In 1953, after the death of their parents, Tom and his older brother Jack jumped a boat to Australia but due to a fire they ended up on a boat to Canada. They both got a job at Searle Grain Farm in Selkirk, Manitoba and at Greys Mink Ranch in Headingly. Tom moved on to work for Taillieau Construction for 13 years, until he moved to The City of Winnipeg Fort Garry Div. in 1965 as a heavy machinery operator; where he was well known for ploughing the roads in his beloved Grader. For many years he worked alongside his long-time friend, aka his "Eldest Son" Blair Schapansky (Gloria) until he took a well deserved early retirement in 1993.
Tom and Linda moved out of the city and purchased their cabin at Chelsey's Resort in Petersfield, MB where they resided for 22 years. Tom enjoyed doing the garbage run in the resort, cleaning the roads and working at the marina until they downsized into Lyons Manor in Selkirk, for the last six years.
Tom was predeceased by his parents William and Annie (Mullan) Hemphill; his brothers, Robert, Willy, and Jack; and sisters, Anna, Nelly and Rachel.
Tom is survived by his beloved sister Jean Listen in England and called her weekly until his passing; his beloved and cherished wife of 59 years Linda (Dell) Hemphill, she is heart broken over the loss of her sweet Irishman - her one and only love and will miss him every day; his four children, daughters, Liz (Don) Chopeck and Margaret Hemphill (friend Tom Szo); sons, Joe Hemphill (Kathleen Harris) and Ron (Candace Harris) Hemphill; grandchildren, Michael (Michelle) Chopeck, Kim (Sam Lewis) Chopeck, Ashley Hemphill, Dustin Hemphill, Christopher (Lindsey) Banman, Giuliana Di Girolamo (Chase Buhler), and Ryan Harris and great-grandson Charles Thomas Oliver Chopeck. He is also survived by his sisters-in-law, Sandra Sanderson and Janice Dell (Jim) that he raised since the death of their mother in 1971; his brother Jack's children that he adored, Kelly Hemphill, Kim Seabrook (Dave Hall) and Kevin (Linda) Hemphill, and numerous nieces, nephews, great-nieces and great-nephews in England and Northern Ireland.
Cremation has taken place and a memorial service will take place at a later date.