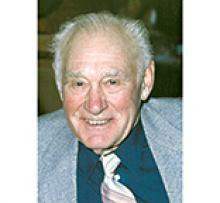 As gently as he lived every day, Dad peacefully left us in the early morning hours of Sunday, November 21, 2021, exactly one month shy of his 103 birthday. He was a humble man, devoted husband and an incredible father. We are so very grateful for our time together.
Cornelius, (or Niel) as he preferred to be called, was born in Rossburn Manitoba on December 21, 1918. What an incredible life he led. Dad was born during the Spanish Flu Pandemic, experienced the great depression, and survived active duty in Second World War, and showed resilience adapting to the restrictions of Covid.
Dad worked hard on the family farm in Angusville, Manitoba, before enlisting in the army. While proudly serving overseas in the Royal Canadian Army Corp Services, he met Edna Jelley and she returned to Canada with him as a British War Bride. Together they settled on Rutland Street in St. James and welcomed two sons, Ian and Peter, into their family.
Together, as a family, they embarked on many family vacations. The family enjoyed many camping holidays in Canada and road trips to California. Dad designed and created the prototype for a fold down tent trailer long before they were a common site in campgrounds. His design drew the attention of many Canadian and foreign tourists in Banff in the early 1960's. The family likes to joke that had he registered a patent for his design, the Coleman tent trailer may have been known as the Chuckrey tent trailer. Dad also went on to convert a former bread truck into their first motor home in which they also enjoyed many camping holidays.
Dad displayed incredible strength and integrity throughout his life. He was a devoted husband to his first wife Edna, lovingly and tenderly caring for her until her passing in 1974.
A few years following Edna's death, Niel connected with extended family in BC and began corresponding with Mildred, who had been married to his brother Fred, prior to his death in 1964.
Mildred joined Niel in Winnipeg and they were married in 1979. Niel was employed for many years as a customer service representative with Winnipeg City Gas, proudly mentoring many new young employees when they joined the company and rarely, if ever, taking a sick day. As retirement approached, Niel and Mildred purchased property on the beautiful sunshine coast in BC. Upon retirement in 1983, Niel and Mildred packed their belongings and headed west on their next adventure. Niel designed and built their lovely home in Halfmoon Bay. Niel was an avid gardener and his yard was a beauty to behold. He even managed to successfully grow kiwis in Canada. Dad's garden was his sanctuary and he planted and tended his garden well into his 90's.
In retirement, Niel and Mildred enjoyed many travels and adventures. They embarked on annual roadtrips to Mexico in their motorhome, several cruises, as well as trips to England and Europe.
As they aged, Mildred suffered many mishaps and Niel tenderly provided care and support over several years. In 2015, Niel and Mildred moved from their beloved home in Halfmoon Bay to a retirement centre in North Vancouver. In 2016, Niel was admitted to Cedarview Personal Care home. Following Mildred's death in 2017, we arranged for Niel to move to be near those who loved him. In March, 2018, with the assistance of Veterans' Affairs, we were able to transfer Dad to Deer Lodge Centre in Winnipeg where he had resided since March, 2018.
From the deepest parts of our grateful hearts, we thank all the Staff on Tower 5 at Deer Lodge Centre for the exceptional care, compassion and respect shown Niel every day of his stay.
Niel is survived by his sons, Ian (JoAnne) and Peter (Shelley), stepdaughters, Patricia and Colleen (Paul). He also leaves to mourn his legacy, grandchildren, Jacqueline (James) Andrew (Dena), Katelyn (Theren) and Daniel, Barbara (Tom), Chuck (Fani), Nicholas, Michael (Jordyn), Lesley and Rebecca. Great grandchildren include Benjamin, Reid, D, Angus, Darian, Micaela, Katerina and Madalena. He is also survived by his sister-in-law Val Jelley in Long Eaton Notts , England.
Dad had a strong will to live and love. He never complained. He was patient, tolerant, stoic and a little stubborn. His lessons and wisdom will continue to inspire us and future generations. We will say Good bye in the same manner Dad ended every conversation with his loved ones...
" Love you and Leave you . . . God Bless."
In lieu of flowers, we ask that you tend a garden, take a walk in the great outdoors, or enjoy a bountiful meal with family and friends, all things near and dear to Dad.
Cremation has taken place. A private service will take place next year when family can gather to share memories and celebrate a life well lived.