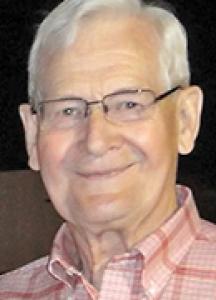 PURVIS: It is with profound sadness, that we announce the passing of Harvey Edgar Purvis, beloved husband, father, grandfather, and great-grandfather, on Thursday, November 25, 2021 at Hillcrest Personal Care Home at the age of 92 years. Harvey was born on February 26, 1929 near Holland, MB to Irene (nee Stewart) and Frank Purvis. He left Holland when he met the love of his life, Muriel Louise Cullen and they married in 1954, together raising four amazing children. He was a wonderful husband and soulmate to Louise for 67 years and she misses him dearly. The couple initially settled in Virden for a couple of years, and moved to Brandon in 1957, where they spent the rest of their lives together. In his younger years, Harvey spent countless hours involved with the children's activities and was often known as the "hockey dad" to the neighbourhood kids. He loved to tinker in his garage, fixing anything and everything around the house, especially his Electrolux vacuums. Most of all, Harvey loved visiting and spending time with his family. He enjoyed watching the grandchildren grow up and treasured the times when any of them came to visit. Harvey was a true businessman and salesman. Some of his experiences included owning a gas station repair shop and later, Purvis Tire in Virden, selling advertising for local radio stations, and finally selling real estate for HomeLife Reality. Harvey enjoyed interacting with people and continued to do so until he was 85 years young! Harvey will be greatly missed by his wife Louise; sons Donald (Candace) of Houston, TX, Blair (Lisa) of Onanole, MB, and Murray (Karen) of Brandon; grandchildren Mike (Jamie), Alex, Caity (Bryce), Dan (Carly), Kyle (Kaitlin), Drew (Sarah), Brie (Chad), Brittany, Tara (Ryan), Derek (Erin), and Stephanie (Robin); great-grandchildren Harvey Jr, Lincoln, Hartley, Harlin, and Hainsley; sister-in-law Rosemarie; nephews Wayne (Donna) and Dale (Barb); as well as many cousins and friends. Harvey was predeceased by his parents Frank and Irene; brothers Perry (Bessie) and Hartley (Rosemarie); and his daughter Joanne. A private family graveside service will be held at Millford Cemetery at a later date. In lieu of flowers, donations in memory of Harvey may be made to any local animal rescue organization or the charity of one's choice.