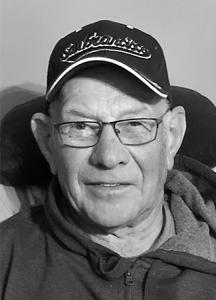 WIEBE, Edwin Jake (November 8, 1937 – November 5, 2021). Edwin Jake Wiebe passed away on November 5, 2021 at the Brandon Regional Health Centre. Edwin was born November 8, 1937 in the Winkler area. He accepted Jesus as his personal Saviour at a young age and was baptised, declaring his faith out loud, in Winnipeg, MB by Pastor Barber. He attended school in Horndean, MB until the eighth grade, when he dedicated his life to farming with his parents. At age 16 Ed began work in road construction, moving up the ranks to run D-8 caterpillar units and scrapers. He went on to run heavy equipment at the Westroc Gypsum Mine north of Amaranth, MB. Edwin married Amanda Hoeppner on June 13, 1964 and together raised their four children at the family farm west of Amaranth. Ed was actively involved in the community, and served on the boards of the local Credit Union, CSSM Church, and the Silver Ridge Bible Chapel. Ed's love of all things mechanical paired with a love for speed led him and his brothers designing and building an airboat and snow plane. His sense of adventure will be missed by the many who were touched by his joy of water skiing, camping, hunting, curling, hockey and all things outdoors. Edwin farmed with his brothers until he retired to Brandon in 2009 where he continued to find joy in the outdoors. Many hours were spent gardening with Amanda and much of the harvest donated to charities such as Samaritan House. The garden was a place of joy, giving endless tractor rides to his great grandsons whom he called his "little boys." Ed's life was lived to the fullest, his faith in God evident in every step he took. It would be his wish for those who loved him to grieve in their own fashion, and then to move on and live life to the fullest as he has done. Edwin is survived by his wife Amanda (nee Hoeppner), son Anthony Wiebe (Mimi), daughters Naomi Waddell (Mike), and Alana Mackay (Nathan); grandchildren Trevor Schapansky (Andrea), Brantley Schapansky, Kaytlyn Bilodeau, Felysia Greene (Nathan), Tara Kauenhofen (Daniel), Micah Waddell, Dawson Waddell, Emily Waddell, Leham Mackay, Rachel Mackay, Bethany Mackay, and Lara Mackay; great grandchildren, Owen Schapansky, and Sebastian, Damon and Barrett Kauenhofen; brothers John Wiebe (Sandi), Harry Wiebe (Carol),and Elmer Wiebe (Audrey). He was predeceased by his parents Pete and Tena Wiebe, sister Doreen Harder, daughter Loreena Schapansky (nee Wiebe), granddaughter Evalea Waddell, and grandson-in-law Austin Bilodeau. The service to celebrate Edwin's life was held at Memories Chapel in Brandon on November 9th, 2021, with the internment held at Silver Ridge Bible Chapel. Donations in Edwin's memory can be made to the Samaritan House in Brandon or to the Heart and Stroke foundation.