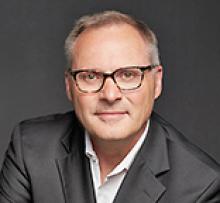 Claude Paquin passed away peacefully in the loving arms of his wife Stacey and daughter Emilia on November 22, 2021, in Calgary, Alberta, at the age of 60, after a short, courageous battle with cancer.
Claude grew up in Winnipeg, Manitoba, with parents, Yvonne and Fernand Paquin, his four brothers, Gilles (Patti), Michel (Jeannette), Robert (Michelle) and Paul (Sue), and his sister Myriam (Jim). Always a talented athlete, he played many sports, including hockey, golf and basketball. He was a member of the Manitoba Bison Volleyball team during his time at the University of Manitoba. Claude continued his sporting career after university, where he played in many volleyball and basketball tournaments. He was a member of the Calgary Senior Men's Basketball league for several decades.
Claude was a people person. He had an amazing ability to relate to anyone, no matter their background or circumstance. His friendship was like a fast-acting adhesive and once cured you were bonded for life. Claude was the glue that kept so many of his family and friends connected. His ability to connect people led to many career successes in his time spent in the radio industry, his many business adventures, and then finishing his career in land development, property management and real estate.
Where Claude really shone was in his volunteer work. His passion for sport, never-ending support of Emilia and belief in community involvement were very evident in the years he spent as President of the Calgary Swordfish Swim Club and the Calgary Renegades Water Polo Club.
Claude was an entertainer. Whether it was playing guitar and singing, late night dinner parties, his joke telling ability, his creative mixology (including his infamous Caesar's) or his game "short snappers"; if Claude was there, you knew it would be a good time. He was the leader of the band of brothers-in-law, incited the use of the "cone of silence" and creator of the dance "the stomp".
He had an incredible sense of adventure. Claude, Stacey and Emilia travelled to many exotic places, including Nicaragua, Belize and El Salvador. They often spent their summer vacations travelling with their beloved dogs in their 1980 Volkswagen van, endearingly known as "Westie."
Claude will be remembered for his infectious smile, positive outlook on life, his amazing sense of humour, love of the arts and music, his innate ability to make people feel welcome, his legions of friends, and his devotion for his family and friends. Most importantly, he will be remembered for his powerful, unwavering love and support for Stacey and Emilia. His passing leaves an enormous hole in the hearts of many, but he will live on in the legacy he has left behind.
There will be a Celebration of Life held in his honour on December 20, 2021 in Winnipeg and December 22, 2021 in Calgary.

Photos, memories and condolences may be shared with Claude's family through www.evanjstrong.com