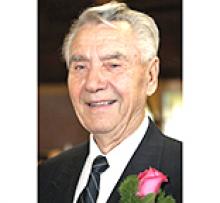 It is with deep sorrow and much love that we announce the passing of Ted Malawski, three months after his 99th birthday. Dad left us peacefully, with family at his side, at the Lion's Manor Personal Care Home in Winnipeg. He was a humble man, a devoted husband, and an incredible father, grandfather, and great-grandfather.
Ted was predeceased by his wife Aniela (2013), his eldest daughter Halina Roth (2000), and his son-in-law Walter Roth (2014). He will be lovingly remembered by his sons, Richard (Raymonde), Ed (Joy); his daughter Teresa (Kelly Smith), his eight grandchildren, and his seven great-grandchildren.
A private family funeral service with Christian Burial Mass for Ted was held on Wednesday, December 1, 2021 at St. Alphonsus Roman Catholic Church. Interment followed at Holy Ghost Catholic Cemetery.
A celebration of Ted's life with family and friends will be held at a later date.
This obituary can also be viewed on the Cropo website at www.cropo.com.