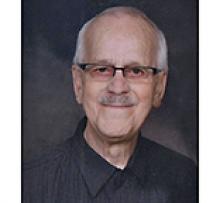 Len Perry died quietly on Friday, November 26, in Winnipeg, where he had been born and where he had always lived. He was spared the pain some others endure and, uncomplaining till the end, he was grateful for his life each day.
Len was the youngest child of John James Perry and Ruby Edna Zinn. His brothers and their spouses were dear to him as were their children. But little could match the love he had for his own children - for Tanis and Carla -in whom his spirit rejoiced. Their children and grandchildren, together with the love of Don and Carol, gave him all he needed to sustain the warmth of heart and the graceful acceptance he offered to all he met.
To say that Len was a simple man is to note one of his virtues. Certainly, he was uncomplicated, but not naive. He was a person of deep feeling, yet of great strength. There was never any 'side' to Len; he was never manipulative or pushed any agenda. Whatever affirmation he needed, he received as people passed through his life. He did not press for more.
Life will not ever be the same for those of us who loved him deeply and were so deeply nourished by his spirit: by Don Ross, by Carol Perry, by Len's daughters, Carla and Tanis and their families, by Don's daughters, Iona, Rachel and Christie and his son Andrew. Our tears are more than matched by the abiding impact of the glad heart with which he embraced us, and which made of us all kinder and more compassionate people.
Len Perry was a man of faith. He 'looked for the resurrection of the dead and the life of the world to come.' He knew he 'was not alone' in this life or the next and he was unafraid. For what more could we hope?
Service for Len will be at Augustine United Church, 444 River Avenue, on Saturday, December 18 at 1:30 p.m. Burial following at Brookside Cemetery.
All in attendance are required to Be Fully Vaccinated, Only Those Who Can Show Proof Of Vaccination And Government Issued ID Will Be Permitted To Attend. Face Masks are Mandatory and gathering limits will be observed.
In lieu of flowers, donations are suggested to Augustine United Church and/or St. Michael and All Angels Anglican Church, or to a charity of your choice.

Rest eternal grant unto him, O Lord,
and let light perpetual shine upon him.