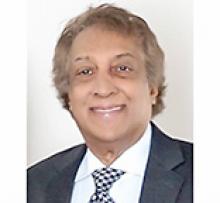 At his home, surrounded by his loving family, Frank passed away peacefully in the early morning of November 26, 2021.
Frank is survived by his loving wife of 45 years, Marilyn; his two daughters, Natasha (Michael) Brown and Kristen (Mark) Reimer; and four grandchildren, Ethan, Rachel, Dylan and Kylie. He is also survived by his brothers, Horace (Sheran) Armoogum and Rawle Armoogum; sisters-in-law, Shelagh Crockatt (Jim) and Joan Dudar; brother-in-law Jim (Lynne) McPherson; and many nieces and nephews. He was predeceased by his parents, Claude and Verna Armoogum; sisters, Carol Mills and Sandra Allen; brother-in-law John Mills; and his parents-in-law, Jim and Pat McPherson.
Frank was born in Couva, Trinidad, the third of five children. He spent his happy childhood years enjoying Carnival each year, eating Caribbean dishes, climbing palm trees and making lifelong friends.
He moved to London, England for his high school years and later trained to become a barber. Frank lived in London for many years and also spent a year in Denmark before immigrating to Canada in 1968 to join his family who had already come to Winnipeg.
He continued his career as a barber and eventually opened his own shop, The Village Men's Hairstyling, with Krystyna Obara. Together they ran their successful business for over 40 years. Throughout the years, he had hundreds of loyal customers, some spanning over four generations. Frank loved both his work and his customers, and they loved him in return. He never wanted to retire; always telling us, "Just one more year". There was rarely a place he would go where he did not run into a customer.
Frank loved his family beyond words. There was nothing that he would not do for them. He spent many hours watching dance recitals, hockey games and karate lessons.
In his spare time, Frank loved to golf. Every Sunday was spent on the golf course.
Another special part of his life was going on vacations to the Caribbean, Tahiti, Hawaii, Japan and many more places around the world. The vast majority of these trips included a visit to a Disney park or on a Disney cruise. Nothing made Frank happier than when the whole family was away together on vacation.
Frank was a kind and loving man and he will be missed by everyone who knew him.
Our family would like to thank everyone who supported us throughout Frank's courageous battle with cancer.
If friends or family so desire, a donation may be made to Crohn's and Colitis Foundation of Canada or a charity of your choice.
A private family funeral will be held.

As Frank would always say,
"I'm not asleep, I'm just resting my eyes".