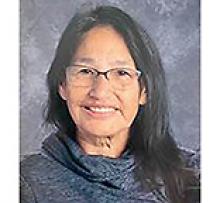 It is with great sorrow that we announce the passing of Cecile Patsy Williams "Azhigohns" on November 30, 2021.
She leaves to mourn her sisters, Annie Dunbar, Marion Moneyas (Danny), Rita McKenzie (Mervin), her brothers, Bernard McKenzie (Beverly), Ronnie McKenzie, Barry McKenzie (Wanda), mother-in-law Flora Williams, in-laws, Eileen Williams, Leona (Robert Bull), Gladys (Michael Ferchuk), Wilma, Claude (Holly), aunts, Nancy Clark, Janet (Hank Simard), Lillian (Allen Bushie), Uncle Clarence Peebles (Yvonne); she had numerous cousins, nieces, and nephews, including great-nieces and nephews.
Cecile was predeceased by her husband Ivan and son Corey Williams, her mother Albina, father Douglas McKenzie, father-in-law Arnold Williams, brother Kenneth McKenzie, sister Lillian McKenzie, brother Paul McKenzie, sister Alma, brother Joseph, brother-in-law Ben Dunbar, nieces, Tanessa Williams, Lindsay Frohwerk, grandparents, Adele and John Moneyas, and numerous other relatives who have gone on to the spirit world.
Wake services will be held at Cecile Williams' residence on December 3, 2021, to December 5, 2021. Funeral service will be held at the Hollow Water Band Hall December 6, 2021, at 1:00 p.m.
Pallbearers will be nephews, Keane Moneyas, Terry McKenzie, Dennell Swampy, Jonathan Williams, Alvin Bushie, and Brady Bushie. The service will be officiated by Rev. Norman Meade.
Cecile was born in Agaaming (Aghaming), Manitoba on March 14, 1958. She grew up in Hollow Water and married Ivan Williams on July 8, 1979. Cecile received an education degree in 2000 and taught in Sagkeeng, MB and at the Wanipigow School. She retired from teaching in her home community after 20 years of dedicated service.
Cecile always enjoyed celebrating life with family and friends, having potlucks, feasts, and gatherings. She loved the outdoors and enjoyed camping out at various places such as Black Island Days and Saunders Creek. She especially loved going on the annual family canoe trips to Shallow Lake and to the Sundance ceremony in Sioux Valley. She loved to travel and often went on trips out of province and to the U.S., either with her husband Ivan or her sisters.
Cecile had an elegant demeanour and was a beautiful, caring, and humble person who loved to laugh at her husband's jokes. Whatever Cecile set her mind to do, she would accomplish it. Once she shot a bear that had approached her doorstep. Cecile showed strength and courage in dealing with life's struggles. She remained positive owing to a strong belief in God and in the values of traditional cultural teachings.
Cecile's wake will begin Saturday afternoon, December 4 at her residence, house 182 Aghaming Road, Hollow Water, Manitoba, her funeral will follow in the Hollow Water community hall on Monday, December 6 at 1:00 p.m., cremation will follow with interment at a later date.