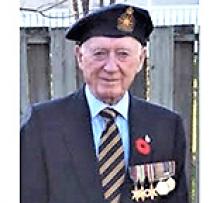 James Arthur Craig, known fondly as Jim, passed away on Sunday, November 28 at Grace Hospital in Winnipeg, Manitoba at the age of 98.
He was predeceased by his wife of 60 years, Frances Marolyn Craig (née Houston) and their infant son Thomas. James (Jim) is survived by his sister Jean Oatway and his sisters-in-law, Josephine Rae and Marion Craig; his children, Susan Manness (Mark), Janice Vosper (Greg), Jim S. Craig (Renate), Dan Craig (Brenda), Lori Matthews (Jonathan), Kristjana Commandeur (Ted), Matthew Craig (Delcie) and Kerry Craig (Margot); his 20 grandchildren and 10 great-grandchildren.
Born to William and Janet (Jennie) Craig on September 12, 1923, Jim was the 11th and youngest child on the family farm at Sturgeon Road and Saskatchewan Avenue in Winnipeg. Jim was a veteran of the Second World War. In 1942, he enlisted in the Royal Canadian Signal Corps and served overseas in North Africa, Sicily, Italy and Holland. After returning to Winnipeg, Jim obtained his Agricultural Diploma at the University of Manitoba. He met the love of his life, Marolyn, at the Winnipeg Roller Skating Rink and they were married on September 18, 1948.
The happy couple lived in Winnipeg on Sackville Street and then 958 Winnipeg Avenue before moving to a mixed farm at Argyle, Manitoba and starting their family. In 1959, they moved to Arborg, Manitoba, where Jim accepted a position with the Veterans Land Act, later known as the Farm Credit Corporation (FCC), as a Credit Advisor. In Arborg, Jim and Marolyn made many friends and were active in the community. Jim served on the Ardal Lutheran Church council and the Arborg Hospital board. The family then moved to Portage La Prairie in 1974, where Jim continued his career with the FCC as a District Supervisor, retiring in 1985.
Jim and Marolyn then moved to Glen Bay and built their lake retreat for their retirement years on the shores of Lake Winnipeg, near Camp Morton, Manitoba. They enjoyed travel immensely with friends and family, visiting Cuba, the United Kingdom, Australia, Mexico and Hawaii, until Marolyn became ill and later passed away in 2008. Jim made the decision to move into Gimli, where he continued to enjoy walks, breakfasts at the Gimli Hotel and his membership at New Horizons, particularly lawn bowling. At the age of 95, Jim moved to Winnipeg to be closer to family and lived at Sturgeon One.
Jim was an inspiration to all who knew him for his integrity, spirit of community, love of family and steadfast care of his beloved wife Marolyn.
The family would like to thank the doctors and nurses at Grace Hospital and the staff at Sturgeon One in Winnipeg.
In lieu of flowers, donations may be made to Siloam Mission and Health Sciences Centre Foundation.
Memorial service will be held on Sunday, December 12, 2021 at 11:00 a.m. at the MacKenzie Funeral Chapel, Stonewall. The service will be live streamed online at mackenziefh.com.
Due to public health restrictions all attendants must be fully vaccinated and provide confirmation.