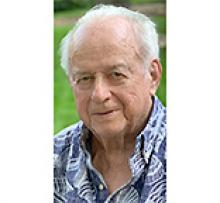 It is with great sadness that we announce the passing of our loving husband and father.
Barrie was blessed with many friends and interests. He was a man who knew how to live, love, laugh, teach, learn, and revel in the success of those close to him.
Barrie and his wife Irene had a fabulous 57 years of marriage. They shared wonderful times with friends at their Victoria Beach cottage. They loved their holidays abroad, and cherished family occasions with Sandra and Elias. There was never a dull moment with Barrie in the room.
Barrie was an optimist and a risk-taker. Blessed with a brilliant mind and uncanny ease with numbers, amid a commodity market boom in the mid-1980s, he considered becoming a full-time pit-trader on the Winnipeg Commodity Exchange. At the time, Barrie was a respected high school guidance councillor at Garden City Collegiate. And so, despite the prospect of no steady income, no pension, and no days off, in an occupation very much subject to the vagaries of the Canadian climate, Barrie set off, mid-life, on this new career. In a life lived with many curiosities and turning points, thankfully, success followed.
A lifelong bridge player, he regularly overbid but he always found a willing partner to support that hand. Reports of winning the odd extra trick through banter rather than skill have become something of a legend. In his later years, he could not distinguish between hearts and diamonds, but collected tricks through both charm and finesse.
When he taught his son to ski in the mid-1970s, his opening advice was: point your skis downhill, keep your head up and look three moguls ahead. Later that year, Barrie had taught both his son and father to ski. Three generations on a T-bar, Mathew aged four, riding between his father and grandfather, is one of the family's lasting memories.
He was also an avid musician and saxophonist. For his 50th birthday, Irene had his precious Selmer Sax refurbished. From that day forward, he filled the room with jazz in his interpretation of the missing sax accompaniment. No song ever sounded the same twice.
Barrie loved to laugh and to make other people laugh. His granddaughters, Rose and Ines, who have become equally zealous storytellers, now follow in the footsteps of their "Papa Bear" who will forever be known for magic wands, pizza delivery games, and obscure dance moves.
My final thought comes from the moment of his passing, when my mother Irene looked at me and said: 'You have been the luckiest boy in the world'. My dad always made me feel that way.

You brought so much joy to our lives Barrie. You will be deeply missed.