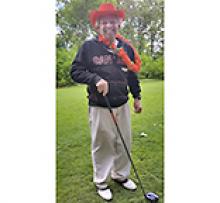 Richard Williams passed away in his sleep on December 6, 2021, at 77 years, after a short battle with cancer.
He was preceded by his wife he loved of 53 years, Joan (Pulyk). He will be missed by his daughters, Ricki (Braden) and Kari (Stu), grandkids, Haley, Brett (Budster), Zak, Cashden and Reid. He also leaves behind sister-in-law Bev Michalick; Gary, Lisa and their families, sister Pat Bisset, brother Wayne Williams (Florida), predeceased sister Doreen Dobratz, and Aunt Ollie Rosnyk (St. Albert).
Rick was born in Winnipeg and knew someone everywhere he went. He was famous for telling jokes and stories. Rick volunteered for three decades coaching hockey in North Kildonan and Transcona and taught at R.B. Russell until he retired in 2001. He loved golf and worked at Larter's and the Meadows as a Marshall for many years.
He enjoyed travelling and going to Club Regent, mostly, to visit people. Family was the most important thing to him, and his daughters were fortunate enough to enjoy his last holiday together in Mexico in August. He was the best dad anyone could ever ask for; he provided his daughters with so many wonderful memories!
There will be a celebration of his life this summer at the family home he has loved since 1964. A golf tournament in his honour will be hosted by his best friend Stu Watt.

We will miss you everyday Rock' N Rick!