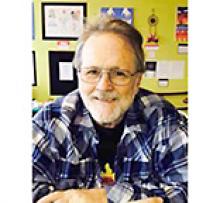 Peacefully on November 29, 2021, holding hands with his love Danielle, like the magician he was, Joe left this world to begin a new adventure.
He will be sadly missed by his wife Danielle (née Lagassé); his sister Katie McLellan of Portland, Oregon; brothers, Nick McLellan of Guadalajara, Mexico, Nathan Byerly of San Francisco, and Kevin McLellan (Josondra) of Corvallis, Oregon; and his brothers and sisters in-law, Guy (Beryl), Paul (Yvette), Nicole (Ron), Marc (Bernice), Roxanne, and Ron Belisle (Brenda). Joe was predeceased by his parents, Jane and Daniel Jr.; brother Zach McLellan (Chris) of Manchester, Washington; his father and mother-in-law Auguste and Claire Lagassé; his sisters-in-law, Paulette and Lupita; and nephew Joel. He always had a special place in his heart for Zavier, Maxim and Echo as well as numerous other nephews, nieces, great-nephews and great-nieces. Joe loved the younger generation and was always inquiring as to how all the children were doing.
Joe had a special love for all animals and especially his cats, Luxton, Cupcake, Ciboulette, DanPatch, Shadow and Junie. His cats and his books were his special departing gift to Danielle.
He was born in Monterey, California and grew up in Corvallis, Oregon and later moved to North Dakota, where he spent most of his youth. When the Vietnam War started in 1967, Joe decided to move to Canada. In Joe's words, "to teach children instead of going to Vietnam and be responsible for killing them". Joe had an English and Drama degree from North Dakota State, which he used to teach school at Melita, then at the Children's Home of Winnipeg, setting up an education program. After this he took a year off work, and went back to University of Manitoba to get his teaching certificate, after which he developed many relationships teaching at Luxton, Machray, Norquay, and Aberdeen schools in Winnipeg, and then moved on to the Beedabun Junior High School program where he set up an aboriginal street kids program, for which he received the Hilroy Fellowship Award by the Canadian Teachers Federation. A great accomplishment!
He was a kind and gentle soul who was always in teaching mode whether a person was aware of it or not. He was also an accomplished storyteller. This is a gift that was passed down to him starting at the age of six from his parents and grandparents, the people that Joe said were the most influential in his life. He was a healer, a magician, an author, a coach, an inspiration, and a role model. He was also a Reike master sending out positive energy to the world. In short Joe was a strong advocate of the underdog and anyone in need. He would go out of his way at any time to help those in need; not just financially but also spiritually and emotionally. He was able to identify with people and interact with all to make them feel included, bringing smiles and happiness to people in many languages.
Joe built and developed many relationships with people all over the world. Many of these special relationships were with his students (his kids). Right to the end Joe kept in touch with many of them. Many students he taught became teachers and in return would invite him into their classrooms where he would share his storytelling. Joe would also do storytelling at the Living Prairie Museum, Fort Whyte, ANCR CFS-EIP, ANFRC/SBLCC - Cultural Camp, Grassy Narrows, and at various Hutterite colonies. He was a Pipe Carrier and considered an elder in the Seine River School Division.
He often talked about how he spent time with his grandparents and he credited them for his learning of their way of life and beliefs. He talked about having an aboriginal background and sort of an Irish-Catholic background that brings about great confusions and all kinds of contradictions and culture clashes. He was a man of faith and in 2014 was ordained a Bishop in the Progressive Catholic Church of Canada by Bishop Bob Drayer, an achievement that he was very proud of.
He loved life and journeying with people. Joe was a very calm and peaceful individual, approachable by anyone. He always had a very kind heart; warm smile, a great sense of humour, loved telling jokes and was an amazing STORYTELLER, WRITER, and AUTHOR, with the hope that people would follow his tradition and continue to tell their stories.
He always had time for people, families, and their children. He loved to hang around with the staff at Prairie Sky Book Store, enjoyed time spent with Jackie Traverse - for her creativity and friendship, time spent with the folks at My Care Pharmacy, he loved golfing with Frank (Carol) and going to WSO with his friend Grant. He enjoyed collaborating with Jessica Senehi and coordinating the Winnipeg Storytelling Festival with her, and appreciated Dora Maendel for her special friendship. Significant in his life in many ways, Anne and Paul Mahon were very fond of Joe and knew him since back in the day when he was a Deacon at St. John Brebeuf Church. He loved thrift stores, bargains, garage sales, book sales, and all things sports. He also loved animals and was a strong supporter of animal shelters. In short, Joe loved people, truth be told; he loved anything with a soul and always gave freely of himself.
A special thanks to Drs. George and Joshua and all the staff at the Grace Hospital 5A for your care of Joe in his last weeks.
Joe had a very compassionate heart and will be missed by many. I hope and trust that you will enjoy your new adventure my beloved Joe, we will reunite when the Wolf meets the Raven.
Cremation has taken place and funeral arrangements are pending. A notice of Joe's service will appear in a future edition of the Winnipeg Free Press.