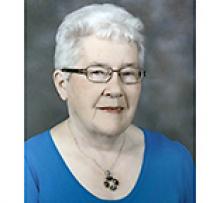 Barbara Olive Mackay (nee Finnamore) passed away, age 88, on November 30, 2021, from Covid-19.
Predeceased by her husband Richard (Dick, 2004) and her eldest daughter Kathleen (Kathi, 2018), she is survived by her daughter Heather Tak and son-in-law John of West Vancouver, her son Kevin Mackay and daughter-in-law Joyce, son-in-law Joseph Brazeau of Lumby, BC; grandchildren, Elizabeth and Cameron Mackay of Winnipeg and Ian Tak of North Vancouver, brother David Finnamore of St. Catharines, niece Linda Calver of Teignmouth, UK, and Canadian nieces and nephews, Donna, Doug and Debbie, Kathi-lynne and Gordon.
Born in 1933 in Tullamore, Ireland, Barbara boarded the Empress of Canada alone aged 17 to immigrate to Canada. She found her way to Winnipeg, met and married Dick Mackay, raised three children and led a busy life. Barbara was a well-respected legal secretary in Winnipeg. She started her 40 plus year career with Pybus Chornous and later worked at Aikens MacAulay. Her expertise and professional work ethic were recognized when she was awarded the inaugural Legal Secretary of the Year award for Manitoba. In addition to her full-time career, Barbara was the family banker and tax accountant, chief cook, and bottle washer and ran "Barbara's Taxi Service" driving both children and grandchildren (and their teammates) to any number of practices, games, tournaments, lessons, competitions, and part-time jobs. Barbara was also the first to volunteer to host or billet visiting hockey and soccer players, exchange students, and many international friends and visitors passing through Winnipeg.
Many summers Barbara and Dick would pack up the kids and the car for driving holidays across Canada and into the US. Family travel adventures (and misadventures) will always be part of our family lore. Later, Barbara and Dick enjoyed visits to Ireland, the UK, Japan, Hong Kong, Singapore, Malaysia, and New Zealand.
At home, family dinner on Sundays will remain a treasured memory. Her hospitality and generosity were frequently on display on card nights with family and friends and other social and celebratory occasions. Each time, plates of "goodies" would magically appear for all to enjoy. Both casual visits and big dinners invariably started or ended with mum saying, "I'll put the kettle on for tea." She was the strength and stay of our family and we will miss her always.
Barbara was a longtime member of the congregation of the North Kildonan United Church and an active member of the Irish Association of Manitoba, and she valued the friendships she made there.
We ask that Family and Friends consider donating in Barbara's name to St. Boniface Hospital Foundation, the Canadian Diabetes Association, or a charity of your choice.
Memorial service will be held at 10:00 a.m. on Monday, December 27, 2021 at Glen Eden Funeral Home, 4477 Main Street, West St. Paul. Vaccination and proof of identification will be required for those who wish to attend the service.