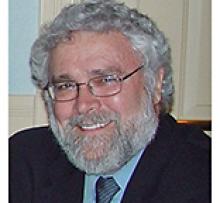 We are saddened to announce the passing of Larry on December 5, 2021 at the age of 77 years.
Survived by his wife Cynthia Jordan; son Caleb Jordan; daughters, Bree Jordan and Lydia Willis; son-in-law Alex Rothney; grandchildren, Giftan Kaonga-Willis, Oscar Rothney, Celia Rothney and Ziamarra Zwingerman.
Larry was born in Paris, Texas on March 18, 1944 then eventually moved to Canada and Winnipeg in 1970, in an opportunity to avoid American politics and pursue a career in neurophysiology. Larry was a brilliant scientist who was a pioneer in spinal cord research and the driving force behind the establishment of the Spinal Cord Research Centre at the University of Manitoba in 1987. Through his visionary leadership, the SCRC has become a world-renowned spinal cord research facility. Throughout his scientific career, Larry epitomised critical thinking, creativity and originality. He was on the leading edge of discoveries of how the brain and spinal cord work together to produce walking. His breadth of knowledge and deep understanding consistently led him to suggest experiments that would only be made technologically possible many years, if not decades, in the future. He trained a cadre of scientists, who now have their own labs around the world, ensuring that Larry's scientific character lives on.
Larry was dedicated, loving father and a man of many stories. He was willing to learn anything and try anything. Larry loved animals, especially horses and loved being outdoors.
A memorial service will be held online on Saturday, December 18, 2021. Please contact his daughter Bree for more details: breanna_jordan@yahoo.com.
Contributions in Larry's memory can be made to: The Spinal Cord Research Centre (SCRC).