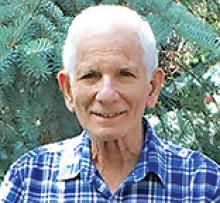 With heavy hearts, we announce the sudden passing of our husband, father, grandfather, and friend, Dr. Peter Tomy (March 23, 1939 to December 9, 2021).
He was predeceased by his parents (Joseph and Shabiha), his brothers (Thomas, Nabih, and infant Nabiel), and his grandson (Joseph). He is survived by Evelyn, his best friend and wife of 54 years, his children, Kathleen, Halim (Zuzana), Kerri (Glenn), and Nadia (Paul). He also leaves behind many cherished grandchildren: Alex, Claire, Eric; Anastasia; Loic, Téa, Manon; Camille and his sisters, Inez, Nesrine, Lorine, and Selwa.
Peter was born and raised in Trinidad. At the young age of 19, he immigrated to Winnipeg by himself. He adjusted to a foreign country and loved the city, even embracing our long winters. Music was his solace, especially during those first few years; his children grew up listening to his extensive record collection. He worked as a porter for VIA Rail, which allowed him to see the rest of Canada. He became a high school math teacher and later pursued studies in medicine. Peter instilled his values of education, work ethic, and the importance of family. He sponsored his four sisters from Trinidad. He also dedicated over 40 years to his family medical practice in Transcona, including following his patients in hospital, assisting in surgery, and practicing obstetrics.
In 1976, Peter and Evelyn built a home in Southdale, Winnipeg and have been there since. Peter absolutely adored his home. Evelyn's remarkable love and strength in caring for Peter fulfilled his wish to remain in his beloved home until his passing.
Peter's family was his greatest treasure in life. His eyes would light up when he smiled - especially when his grandchildren were present. His unconditional love was evident in his adoring gaze, his gentle smile, and in frequently saying "I love you, darling" and "I love you, son." He showered us all with these beautiful phrases.
Alongside a busy medical practice, Peter was actively involved in his children's and grandchildren's lives. He provided them with opportunities he did not have growing up. He coached soccer and watched gymnastic competitions, hockey and ringette games (video-camera in hand). He never seemed to miss a game, including those of his grandchildren. How he loved watching their soccer, hockey, basketball, volleyball games and dance recitals.
Peter was an avid soccer, tennis, and table tennis player. He loved playing table tennis throughout medical school. His children recall their glee when they managed to win a ping-pong match - only to learn Dad had been playing with his non-dominant hand! Were they now up for the challenge of his "good" hand, he would ask with a smile. He also enjoyed playing cribbage and mah-jong. For 31 years, Evelyn, Peter, and his sisters played mah-jong every Friday night. Few events could disrupt this lively (and very loud) game!
Peter enjoyed family vacations. As a young family, they took frequent road trips, including Valleyfair and Apple River. Disneyworld and Christmas in Hawaii were particularly special to him. In later years, Evelyn and Peter made several trips abroad exploring Greece, and Europe.
Peter missed his family back home and returned to the Caribbean when he could, on his own and sometimes with family. Ever sentimental, he always wore his father's watch, long after it stopped keeping time - maybe this explains "Tomy Time!". Each winter, Peter and Evelyn would spend a month with his sisters in a beach cottage in beautiful Barbados. He enjoyed relaxing, walking along the beach with Evelyn, and playing games in familiar climate, culture, and company.
Peter's faith was very important to him. Especially in his later years, he enjoyed attending a weekly mass and an adult faith group.
Peter is remembered as a kind, generous and loving man. He was witty and clever, and his famous one-liners are often quoted by his family. He never lost this gentle charm, and his memory will forever be cherished.