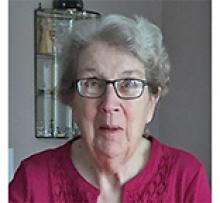 It is with sadness that we announce the passing of our mother, Hazel Buchanan, on December 10, 2021, at Kildonan Personal Care Home at the age of 89 years.
Left to cherish her memory are her three sons and daughter, Jim (Arlene), Berna Walichnowski (George), Doug and Bert (Josie), her grandchildren, Ryan Buchanan (Lachelle), Ashley Butenschon (Erik), Robert Walichnowski (Steph Kloos), Jennifer Walichnowski, Kathryn Walichnowski (Rory Walker), Jason Buchanan (Chelsey Young), and Alexander Buchanan, and her great-grandchildren, Sophie, Chase and Mya Buchanan, Leif, Lewis and Theo Butenschon, and Thomas Walker. Hazel will also be remembered by her sisters, Joan Penner, Mary Juras and Alice Hastings, her sister-in-law Manda Porter, and her many nieces and nephews.
Hazel was predeceased by her husband of 57 years, Alistair (Al) Buchanan (2009), her brother Bud Porter, her brothers-in-law, Harold Penner, Edward Juras and Jim Hastings, Neil Buchanan, William Stewart and Roy Brockest, and her sisters-in-law, Berna Buchanan, Ruth Brockest and Lilias Stewart.
Hazel worked as a telephone operator at Manitoba Telephone System in Morris, Manitoba when she met Al during the 1950 flood. They were married in 1952 and lived most of their lives together in the Riverview area of Winnipeg. Hazel worked at Great West Life Assurance Company until the birth of her first child; she then devoted herself to raising her children. Hazel enjoyed a weekly bridge game with the neighbours for many years. She loved curling and curled in the women's league at the Fort Rouge Curling club twice a week until she was 70 years of age; a highlight of her curling career saw her team play in the Canadian club curling championships in Ottawa.
The family would like to thank the staff on the second floor of Kildonan Personal Care Home for their care of Hazel during the four years she resided there.
A celebration of her life will be held at 10:00 a.m. on Saturday, December 18, 2021 at Thomson Funeral Home, 669 Broadway.
In lieu of flowers, memorial donations may be made to Alzheimer Society of Manitoba.
"Vaccine Proof" and valid government-issued photo identification for all attendees at the service and reception is required.