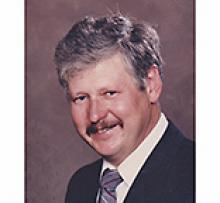 Mourning his loss are wife Linda, sons, Charles (Lauren) and Ivor, and sister Lynne Guthrie (Steve) of Toronto. He was predeceased by his parents, Irene and Peter Anderson, sister Heather Schroeder, dear friend Louise, and a lengthy list of feline companions.
John was born in Oak Lake, Manitoba and schooled at St. John's Ravenscourt and the University of Winnipeg, where many lifelong friendships were forged. His working career started as department manager for Eaton's and then a driver and letter carrier for Canada Post until his retirement.
John met Linda when both were in their 20s and employed by Eaton's. Their friendship endured while they led independent lives and relationships, finally leading to their own commitment to each other and marriage in 1990. Children soon followed, providing a very different role for John and a chance to share his wealth of experience. He was a proud father who shared responsibilities and doted on his sons.
Highly skilled, he was the type of person who excelled at anything he set his mind to. During school, he won provincial medals for target shooting; as an adult he showed prowess as a carpenter, cook, gardener, wine aficionado, armchair historian / geologist / astronomer, etc. His hobbies were many and his passions included social issues, politics and the Toronto Blue Jays. In later years, he cherished moments at the family's cabin until health concerns took over. John's intelligence, integrity, and sharp wit and recall will be missed.
A memorial service will be held on Monday, December 20, 2021 at 1:00 p.m. at Desjardins Funeral Home, 357 DesMeurons Street, Winnipeg, MB.
We ask that those attending the memorial service be fully vaccinated.
Donations in remembrance can be made to local animal shelters or a social justice cause.

Family and friends may sign a book of condolence online at www.desjardinsfuneralchapel.ca