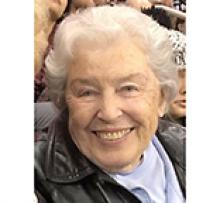 On Tuesday, December 7, 2021, Frances MacCoy passed away peacefully at Golden Links Lodge.
Frances was born in Winnipeg and grew up in Ste. Anne, Manitoba. In 1951, Frances married Hugh MacCoy and they settled down in the Windsor Park area where they raised their three children. Frances was a homemaker; as well, she was an avid gardener and seamstress. Frances enjoyed camping with her family especially to Lake Bronson and often travelled to Grand Forks for a weekend of shopping. In retirement, Frances continued to travel with Hugh, and they were fortunate to go on several cruises and holidays to warm weather locations with Hawaii being her favourite. Frances also loved being a snowbird and spent many winters with Hugh on South Padre Island, Texas.
More recently, Frances enjoyed exploring Arizona with Corrine and Alan and wondered at the beautiful sights, sounds and smells of the desert. She stayed up very late when there was a party at Encanterra, not wanting to miss anything. She also regained some of her 'driving freedom' when she took the wheel of the golf cart and with Corrine on board would often leave Alan far behind. She loved hearing the coyotes howl at night in Arizona, the butterflies and going to baseball games where she cherished a 'game ball' that was presented to her by stadium staff.
Frances was a loyal Winnipeg Jets fan. Since their return to the city, she attended several games with Corrine and got so much enjoyment from attending. The photo, with her classic smile, was taken at a Jets game. She liked nothing better than starting her evening at the 'Club' followed by the rather loud shuttle ride to the game. She was known for how she always laughed when the crowd yelled 'True North' during the anthem. Also evident from the photo was her insistence on having her hair done before the game. One never knew if you would run into Dustin Byfuglien with his 'dreamy eyes'. If Frances was not able to attend a game in person, she always settled into her favourite chair and watched from home. A goal from the opposing team or a bad call from the Ref was immediately followed up with a phone call to Corrine saying, "Can you believe that..."
For the past year and half, Frances was a resident of Golden Links Lodge. She enjoyed participating in the social programs offered by the Lodge. She spent her days reading novels and the newspaper, doing crossword and jigsaw puzzles, and having her nails done.
Frances is survived by her daughters, Corrine (Alan) and Colleen (Pat), grandchildren, Melissa, Jeff and her 'sweetheart' Kaitlyn. She is also survived by sisters, Patricia and Phyllis (Ted) and sister-in-law Lillian. She was predeceased by her husband, a stillborn son and her son, James. She was also predeceased by her parents and three siblings: William, Helen, and Jessie.
A memorial service was held for Frances on Friday, December 17 at 1:00 p.m. at St. Ignatius Parish, 255 Stafford Street, Winnipeg. Inurnment took place after the service.
Special thanks to the staff at Golden Links Lodge for all the care and compassion shown to Frances during her time there. As well, a special thanks to Anwen for being such a kind and considerate friend.
Finally, a huge shout out to Kaitlyn. Grandma was always there for you, and you were always there for her. The time spent with her and the compassion you showed her over the last few months will be rewarded.