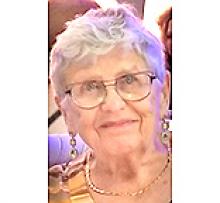 It is with heavy hearts that we announce the passing of Shirley Jean Andrews (nee Davies) on December 8, 2021, at Deer Lodge Centre in Winnipeg.
Shirley is survived by Brian, her husband of 64 years; son Rick (Linda); brother Don (Lenore); son-in-law Bill (Deidre); grandchildren, Lindsay, Brittany (Ray), Brody, Ryley and Jason (Jofil); great-grandchildren, Kastle, Rookie, Avery and Ainsley and many nieces, nephews, family and friends.
Shirley was predeceased by her parents, Arthur and Ivy Davies; and siblings, Floyd (Chickee), Gerry (Vivian), Betty-Anne and Sheila. The loss of her daughter and best friend, Lee-Anne, in 2011 left a void in her heart that couldn't be filled.
Shirley was born in Roche Percée, Saskatchewan, with the family moving shortly thereafter to nearby Springside and then Yorkton, before settling in Winnipeg in 1951. In the summer of 1956, after graduating from St. John's High School, Shirley and a friend were picked up by Brian Andrews while hitchhiking on Main Street, and that was the beginning of Brian and Shirley's life together.
Never one to sit still, Shirley was always looking for a new challenge. She had many careers, some of which were teaching, selling real estate, VIA Rail, the Government of Canada and Avon.
Her many pastimes included checking out garage sales, oil painting, gardening, curling, golfing with the ladies at Transcona Golf Club, Friday night darts and playing dominoes on the deck with Brian. She spent many enjoyable summers at their cabin at Good Spirit Lake, relaxing and fishing with family and friends. She had a huge love of all animals and, over the years, their dogs Spart, Spot and Scampy held a special place in her heart. However, spending time with her grandchildren and great-grandchildren were some of her greatest joys.
A special thank you to all the staff at Deer Lodge Centre on 3 West and 6 West for their friendship and care.
As per Shirley's wishes, cremation has taken place and a Celebration of Life will occur at a later date.
In lieu of flowers, donations may be made to the Winnipeg Humane Society.