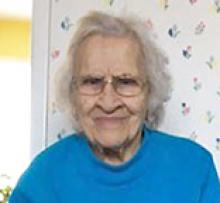 In the early hours of December 13, 2021, our mother Anne McGrath peacefully passed away, with two of her daughters by her side, at the Victoria General Hospital. To greet her with open arms is our late father Jim. Predeceased by sisters, Mary and Effie and brothers, Fred, Alex and John.
Left to mourn her passing are her four daughters and their families: Gail (Ian) of Halfmoon Bay, BC; Carol (Pete) of Oyama, BC; Lynne (Arthur) of Gibsons, BC and Sharon (John) of Winnipeg; grandchildren, Shawn, Sarah, Ashley and Bethany all of Vancouver, BC and Devon (Lindsay) and Kellyn (Patrick) of Winnipeg; and great- grandchildren, Kevin, Emma, Jensen, Alicia and Aubree of Vancouver and Fianna of Winnipeg. Also, to mourn her passing is younger brother Matt Burym and his family and sister-in-law Olga Burym and her family; plus, numerous nieces and nephews across Canada.
Mom was born in a tiny village in Ukraine February 1924. When Mom was six years old the family immigrated to Canada and settled and farmed in the Danbury area of Saskatchewan. As a young teenager Mom was tasked with cooking and baking for the farm hands on neighbouring farms. Mom's homemade bread was second to none and was always a family favourite. We were often seen leaving her home with a loaf or two. One Christmas she gifted Carol with a pillow case full of homemade bread. Mom had an incredible sense of humour.
At the age of 17 Mom boarded a train by herself and moved to Winnipeg. She knew no one in the city but jobs were available where she could earn and save some money. Mom was quite the saver. We are quite sure the phrase "renew, reuse, recycle" started with her.
While working as a housekeeper Mom met our father. Once married they raised four daughters and eventually moved to St. Boniface from Fort Rouge. After several years of being a homemaker Mom returned to the workforce so she could provide a few extra dollars for her daughters as we grew up. Her work ethics were admirable, she never shied away from work and was always willing to help.
Her determination was endless. At the age of 70 she decided to become the family chauffer for herself and Dad, so she finally got her driver's license. Nothing stopped her when her mind was made up. Her stamina remained with her as she continued to be self-sufficient living on her own in the family home without outside assistance. She sure was proud of her independence.
Mom's interests included many varied things, from sewing and knitting to cooking and baking, from playing scrabble and doing word search to listening to music and dancing. No longer being about to Polka she became the armchair toe tapper. Her vegetable garden was envied and admired by many.
Mom's greatest joy was her family whom she dearly loved and adored. Having a family gathering meant so much to her, to be together was the highlight of her days. She has left an immense void in our lives.
The family would like to thank Jeannette for the car rides, Sylvia for the ice cream runs, Ted for the Scrabble games and Mona - the best neighbour ever. We are grateful to you all for being in our mother's life. Although Mom's hospital stay was very brief we are appreciative of all the hospital staff that provided care and showed compassion to our mother.
A Celebration of Life will occur in the spring of 2022, a time for growth and rebirth. Proof of fully vaccinated individuals will be required.
Donations in Mom's memory can be made to Craig Street Cats or the Winnipeg Humane Society.

"Ninety-seven years...it was a great run"