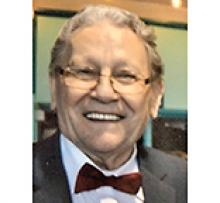 At the age of 91, Paul Demchuk passed away peacefully at the Deer Lodge Centre in Winnipeg on Wednesday evening, November 24, 2021.
Paul was born in Arran, Saskatchewan on July 12, 1930. His parents were Theodore Fred Demchuk and Catherine (Cassie) Shwaykowsky. He was the youngest of 12 brothers and sisters.
Paul went to school in Arran, SK and worked on the family farm, just three miles east of Arran, SK. He met his first wife Sylvia Beck in St. Phillips, Saskatchewan. They were united in holy matrimony at St. John the Baptist Ukrainian Catholic Church in Arran on July 23, 1953. Sylvia and Paul lived in Saskatchewan, Alberta and Manitoba where they raised a family of five children.
Paul was manager at both Co-op and Beaver Lumber stores in Viking, AB; Yorkton, SK; Norquay, SK; Benito, MB and Swan River, MB. He went on to work for the Manitoba Government as a Housing Inspector. In 1979 the family moved to Winnipeg where Paul started his own construction company "Demchuk Construction."
Paul managed his business, repairing and renovating homes throughout the city. He was a skilled carpenter and generous with sharing his knowledge and skills. He renovated many of his children's homes and businesses. Whenever his children needed help with building and renovating, he was always quick to help.
Paul was married to Elsie Kakoske from July 12, 1983 to 1990. On June 29, 1996, Paul married Beatrice Elyda Fay Kyffin (Fifi). Paul and Fay were married until May 27, 2007 when Fay passed away. Even through the most difficult time of Fay's illness, Paul was the most loving and loyal caregiver.
Paul loved to dance and was especially known for dancing a good polka. He was a fan of Ukrainian music, loved to entertain and party with friends and family. Paul was very personable and sociable and loved to chat with just about everyone. He was cheerful, jovial and had a positive attitude and outlook on life. He had a strong faith and was a strong prayer warrior for God. He loved to cook and to garden and did both well, passing along those skills along with his carpentry tips, to his children. Paul took pride in his home and took great pleasure in decorating it for any and all occasions. He was arranging and re-arranging flowers up to the last week before he passed. He always dressed well and took good care of himself. He lived on his own up until this past summer, when he moved to the Deer Lodge Centre.
Paul was predeceased by his parents, Fred and Cassie; daughter Janet; his 11 siblings; wives, Sylvia, Elsie and Fay.
Left to cherish fond memories of him are his children, Paulette (Doug), Delmar (Bernie), Marilyn (Sheldon) and Kathy (Stephen); grandchildren, Amanda (Kurt), Amy (Ryan), Riley (Charise), Tyler (Kelsey), Alison, Matthew, Mia, Darin (Alannah) and Samantha (Dusty); great-grandchildren, Chelsea, Avelyn, Tristan, Milan, Frankie, Ariya and step-grandchildren, Julie, Christine, Joe, Nathan and Cas.


In lieu of flowers, donations can be made in Paul's name to a charity of your choice.
The service will be for a closed family group and live streamed for others to view at 2:00 p.m. on December 27, 2021.