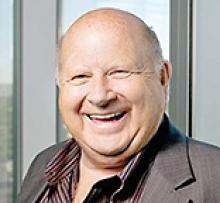 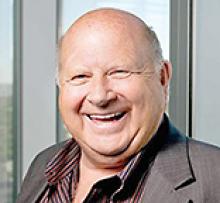 With his loving family at his side, Bob passed peacefully on December 15, 2021, at the St. Boniface Hospital.
Bob is survived by his spouse Doreen, children, Bonnie Cadieux (Paul) and Bobbi Brennan (Suzanne); grandchildren, Sydney, Olivia, Jack, Kelsey, and Breanna; sister Shirley; and numerous nieces and nephews.
He was predeceased by his parents, Walter and Olive; brother William (Bill); and brother-in-law Ken Busby.
Bob's entire life is testament to the power of hard work. In 1964, after receiving his chartered accounting degree from the University of Manitoba, he was hired by Manitoba Hydro into the role of Internal Auditor. Recognized for his focus, commitment, and absolute integrity, he progressed into increasingly senior management positions during his 47-year career there. In 1990, Bob was promoted to the position of President and CEO of Manitoba Hydro, a position he held for 21 years until retiring in 2011.
As President and CEO, Bob provided not only the leadership, but also the vision, that positioned and fostered Manitoba Hydro's growth and development during his tenure. With foresight, he spearheaded and successfully concluded the purchase of the DC transmission and converter equipment assets from the Government of Canada. In addition, under his leadership, Manitoba Hydro acquired Centra Gas and Winnipeg Hydro, significantly increased its energy exports, and introduced one of North America's most successful demand management programs, known as Power Smart. He was also instrumental in the re-location and construction of the downtown Manitoba Hydro Head Office at 360 Portage Avenue in Winnipeg; this building is internationally recognized for its innovative energy-efficient design and it is considered a model of how to take green office architecture from concept to reality.
Bob was immensely proud of his relationships with Northern Manitoba communities. He oversaw efforts to deal with the past, by addressing adverse impacts from hydroelectric development and by doing so, paved the way for the future. In that regard, he established ground-breaking partnership agreements with First Nations peoples in Manitoba for the Wuskwatim and Keeyask projects.
Bob was, without fail, authentic and approachable. He was always happy to talk to employees and any Manitobans about Manitoba Hydro, community, environmental, and other issues, and to not just hear, but also to listen to, their views. His door was always open for anyone who wanted to share ideas with him. Bob was recognized for his respectful approach to labour relations and he proactively sought to build and maintain positive relations with Manitoba Hydro's unions and other employee group representatives. He sought the best for everyone involved in any discussion and decision.
Along with his accessibility and his respect for others, Bob was well known for his keen sense of humour, all qualities that endeared him to those with whom he interacted.
During Bob's term as President and CEO, he was proud in establishing Manitoba Hydro as a community leader, not only as a financial resource for various non-profit and social initiatives, but also by promoting the volunteer efforts and awareness of its employees.
Profoundly aware of his opportunity to give back and always eager to do so, Bob directly supported - with donations, time, or professional counsel - various organizations, including the Riverview Health Centre Foundation, the Canadian National Institute for the Blind, the Young Men's and Women's Christian Association, Hospice and Palliative Care Manitoba, the Manitoba Museum, the Vintage Locomotive Society, and many other worthy entities. He continued to work for various charitable organizations even after his retirement and he remained actively involved in Clubhouse Winnipeg and Fountain Springs Housing until his passing.
In 1999, Bob was elected a Fellow of the Chartered Accountants for meritorious and conspicuous service rendered to the profession. In 2012, he received an honorary Doctor of Laws degree from the University of Manitoba. In 2014, Bob received the Order of Manitoba, which honours Manitobans who have demonstrated excellence and achievement, thereby enriching the social, cultural, or economic well-being of the province and its residents.
Bob was an avid hockey, football, and boxing fan. He also greatly enjoyed his cottage at Laclu and he relished the time he was able to spend there after his retirement. Bob also had a love of cars; he would ensure that his car, no matter which one, was always freshly washed.
Beloved spouse, father, grandfather, sibling, friend, and mentor to so many, Bob will always be remembered as a man who, without fail, celebrated the good in this world and never stopped trying to make it even better in any way he could. Always grateful, Bob left an indelible mark upon the lives of so many. He led by example and he has left so many lives better as a result.
A private family funeral service will be held at the Holy Trinity Anglican Church in Winnipeg when Covid restrictions abate. A larger gathering with friends and family will occur when allowed, and an announcement will be published in the Winnipeg Free Press.
In lieu of flowers, please consider a donation to a charity that Bob was involved in, or to a charity of your choice.

He had an extraordinary level of
individual excellence and achievement and
his light is already missed.


Bob passed away peacefully, with his family at his side, on December 15, 2021, at the St. Boniface Hospital.
Bob was a former President and CEO of Manitoba Hydro.
Funeral arrangements are pending and a longer obituary will follow in a future edition.