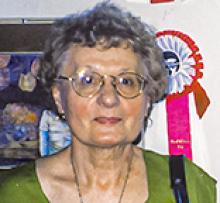 Eugenia (Josie) born on October 8, 1922, the second youngest of nine siblings, eight sisters and one brother. They lived on a Homestead farm near Stubno, Alberta. Mom's father, Kondrat and mother Tekla, built a single room log house on the 160 acre farm at the foot of a 40 acre lake in 1907, the year her parents arrived from the Ukraine! The girls, Mary, Eva, Margret, Mecline, Ann, Jean, Nettie and Josie slept in the loft above the one room log house. Dan, Tekla and Kondrat slept in the main room.
The entire family worked on their mixed use farm, growing vegetables, wheat, oats and hay. They also raised milking cows and horses. Tekla taught the girls how to cook traditional Ukrainian foods. Tekla and Kondrat built an outdoor clay oven, called a "nbamcb pyatz" (sp) in Ukrainian. They could make up to 24 loaves at a time. Needless to say, the neighbours came from miles around to enjoy the garlic butter infused bread fresh from the "pyatz"!
In 1931, during an Alberta census visit, the girls got to choose their Canadian/English names. One of the sisters had chosen the name Josephine, but to her dismay, Mother cut in line and told the census taker she wanted to be called Josephine!
In school, Josie loved to sing and she was good enough to win an amateur contest in Myrnam, Alberta. Joe Kaminsky from Bruno accompanied mom on the violin. Mom sang a Ukrainian song Poznparak mu Xironbhai Kohi (sp) The prize was a trip to the City of Edmonton and the opportunity to sing in a Provincial Contest. She won that contest too! I have no record of this, but I believe the prize she won was a Lieutenant Governor's Academic Gold Medal
Around 1943 to 1944, her sister Jean moved to Winnipeg and when Josie turned 21, she proclaimed her sister Jean was lonely so she joined her sister in Winnipeg. Or so she said... but, she had really moved to Winnipeg, because a few years earlier she had met Walter Stasiuk in Innisfree, Alberta. Walter, her future husband, was from Winnipeg. Walter was working his way across Western Canada with a harvest crew and one of the crew stops was the town of Innisfree. By chance, Josie was working at the Innisfree Co-op Store.
Josie and Walter were married in Winnipeg on August 4, 1945. For the next three decades or so, Josie raised four children, Garry, Louise, Sonia and Dave.
Part of the time, Josie worked as a caterer with her sister Jean at Shaare Zedek Synagog, she became the head caterer for The Winnipeg Airliner Hotel and catered private parties. One of her clients included the Premier of Manitoba.
In the early 70s, Josie decided she wanted to learn how to paint with oils, acrylics and water colors. She joined the Forum Art Institute of Winnipeg and the Norman Art Group.
In 1998, her painting "Lily Pond West of Caddy Lake" Won first prize, the Denise Chivers Memorial Award at the 1998 Red River Exhibition Art Show.
You can see some of her paintings, The Art of Josie (Sharun) Stasiuk here https://uofgts.com/JosiesGalleries
Josie continued to paint until her health began to fail around 2010. It soon became apparent mother needed special care, she was diagnosed with dementia.
Mom's son Dave and especially his wife Debbie Stasiuk provided an enormous amount of time and energy looking after mom and her affairs. Being a care provider is one of the most difficult things to do in life and Debbie and Dave did that, thank you! They are our family heroes, single handedly they prepped and sold mothers home, looked after her finances and placed mom in a wonderful memory care facility at River Park Gardens.
In lieu of flowers, please make a donation to the Manitoba Alzheimers Society.
Her family grew to include four children; a grandson; three granddaughters and seven great-grandchildren. You can see some photographs of mother and her family here https://adobe.ly/3203UTc
Josie was predeceased by her husband Walter Stasiuk; son Dave Stasiuk and granddaughter Laura (Stasiuk) Gill.
Surviving Josie is her youngest sister, Nettie (Sharun) Pichota (Vegreville, Alberta), her son Garry Stasiuk (Vancouver, WA), daughter Sonia (Stasiuk) Haywood (Portland, Oregon), daughter Louise Stasiuk (Winnipeg), granddaughter Meghan (Stasiuk) Yakiwchuk (Winnipeg), great-granddaughter Alyssa Yakiwchuk (Winnipeg), grandson Emett Stasiuk (Portland, OR), great-granddaughter Savana Stasiuk (Portland, OR), great-granddaughter Maiya Stasiuk (Portland, OR), granddaughter Erinn Haywood (Vancouver Wa), great-granddaughter Baylee Haywood (Vancouver, WA), great-granddaughter Isabelle Gill (Red Deer, Alberta), great- granddaughter Elizabeth Gill (Red Deer, Alberta) and great-grandson Evan Gill (Red Deer, Alberta.)