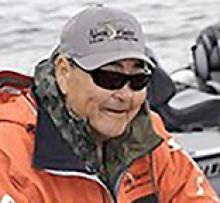 The Creator called for "Fishers of Men" - Lloyd went to be with the Creator at morning light on December 17, 2021. He was graced by his family at Heaven's Gates.
He leaves to mourn his daughters, Sabrina and Vickie Cook, and grandchildren, great-grandchildren; his brothers, Edgar Bird (Lena) and Harley Bird; sisters, Wilma Bird and Clarice Thickfoot (Brian); honorary brother Neil Courchene and numerous nieces and nephews.
He was predeceased by his special friend MJ Brouilette; daughter Sharon; parents, Peter and Margorie; brothers, Randle, Morris, Freeman and Leo; infant brother, sister Yvonne
Lloyd led a simple life, but fishing was his greatest passion. It didn't matter what season, his body was a magnet for fish, whether he was guiding at a lodge or commercial fishing on lake Winnipeg … Lloyd will continue to be in the Creator's vessel as the "Fishers of Men".
The last night of the Wake will be held tonight (Tuesday) at Hollow Water Band Hall. The funeral will be held on Wednesday, December 22, 2021, 1:00 p.m. (tomorrow) at the Hollow Water Community Hall, Hollow Water First Nation. Officiating will be Reverend Norman Meade.