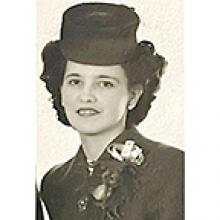 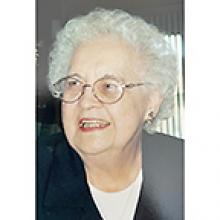 
Peacefully on Saturday, December 18, 2021, Marjorie Blanche Trager (Cloutier) passed away at the age of 94 years at Tuxedo Villa.
Blanche was born October 20, 1927 at Graham, Ontario to Russell and Elizabeth Bowen.
Blanche is survived by her son, Nelson Paul Cloutier (Ditte); her daughter Lorraine Smith (Dan); and her daughter Jennifer Zyla (Brian). She is survived by her grandchildren, Alexis and Julia Cloutier (Ben Schellenberg) and Melissa and Trevor Zyla. She is also survived by her great-grandchildren, Margaret Nora Cloutier Schellenberg and Arthur Nelson Cloutier Schellenberg.
Blanche lived at Graham, Ontario until shortly after her marriage to Nelson J. Cloutier in December 1946. Until 1954, they moved often in connection to Nelson's work at the C.N.R. They moved to Kawa; Kakabeka Falls; and Kashabowie, which were all in Ontario. Son Paul and daughter Lorraine were born in Ontario.
In 1954, the family moved to The Pas, Manitoba and in 1960, they moved to Winnipeg, where Jennifer was born.
Blanche's first husband, Nelson, died tragically the night of January 12, 1967 in an airplane crash while on C.N.R. business north of Dryden, Ontario.
Blanche and her second husband, a widower named Harry Leon Trager, married in July 1971. Harry lived in The Pas, Manitoba and Blanche returned to The Pas with him, where she lived until after Harry's passing in 1977, at which time she and Jennifer returned to Winnipeg.
Blanche was the middle of nine children and was predeceased by siblings Mary, Elizabeth, Joseph Rodgers (a.k.a Henry or Hank), Russell, Connie and Sara. She is survived by older sister Margaret and younger sister Bernice. She is also survived by many nieces, nephews, grandnieces, and grandnephews across Canada and in the United States.
When she settled in The Pas in 1954 and upon returning to The Pas in 1971, Blanche was involved with the work of the Anglican Church Women (ACW) and the Order of the Royal Purple, which was the female auxiliary of Elks of Canada. She assumed leadership roles in the ACW and became Honoured Royal Lady of The Pas Lodge of the Royal Purple.
When Blanche returned to The Pas in 1971, time permitted her to find work outside the home. Her husband owned a department store in the town and offered her a job. Blanche refused the offer, believing that husband and wife working together would not be good for the relationship. So, she began working at the local Macleod store and continued working in Winnipeg at Macleod, Gamble and Zellers. She sold jewelry, lottery tickets and worked in the children's department. She retired from retailing in 1992 upon turning 65.
Blanche became a grandmother at age 53. She was devoted to her grandchildren. She spent much time with them and passed down family recipes and family values to each of them.
Blanche's sports passion was curling. She enjoyed the competitive environment and the fellowship with her curling friends. For years, she watched curling bonspiels on television. She was also a keen aquaciser and a walker. Because of Jennifer's involvement as a figure skater, Blanche also watched figure skating on television for years.
Blanche was especially proud of her pilgrimage to the Holy Land in the fall of 2000, which included visits to Egypt and Israel. The family marveled at photographs of Blanche sitting atop a camel in front of the pyramids in Egypt.
A private family service for Blanche, to be livestreamed, will be held Wednesday, January 12, 2022, at 2:00 p.m. at Green Acres Funeral Home and Cemetery, Highway 1 East at Navin Road, Winnipeg, Manitoba.
You can access the website www.greenacresfuneralhome.com, search for Marjorie's obituary under "RECENT OBITUARIES", click on her name and then scroll down to the "SERVICES" section under the obituary, then click on the "JOIN LIVESTREAM" link.

On Saturday, December 18, 2021, Marjorie Blanche Trager (Cloutier), passed away at the age of 94 years. Blanche was born October 20, 1927, in Graham, Ontario.
A private family service for Blanche, to be livestreamed, will be held Wednesday, January 12, 2022, at 2:00 p.m., at Green Acres Funeral Home and Cemetery, Highway 1 East at Navin Road, Winnipeg, Manitoba.
A longer obituary will follow on Saturday, January 8, 2022.