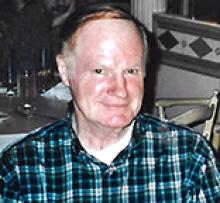 With sadness the family wishes to announce the passing of Ronald Thomas Sheridan.
Ron was predeceased by his loving wife Elaine, and leaves behind sons, Bruce, Alan, and Lorne.
Ron was the second youngest of six children (Donald, Philip, Jean, Mary, and Alan).
Ron started his working career with the Dominion Bank which subsequently merged to become the Toronto Dominion Bank, and continued there until retirement at 60. Following his retirement Ron worked for 10 years in a contract capacity for various Credit Unions.
Ron met Elaine in Brandon. After moving to Fort Frances, their sons Bruce and Alan were born. They next moved to Regina, where Lorne was born. In Regina Ron was promoted to branch manager of the newly opened Hillsdale branch. After seven years Ron was transferred to Winnipeg working initially at the St. Vital branch and subsequently the Notre Dame and Sherbrook branch. Following this he was assigned to Winnipeg regional head office in various credit supervisory roles.
While working and raising a family, Ron attended the University of Manitoba and completed a Bachelor of Arts degree in Economics.
Ron was gifted mathematically, always able to manually take the sum of a column of numbers accurately and faster than anyone with a calculator could. He enjoyed crossword puzzles, and was a proficient Trivial Pursuit and Bridge player.
Until recently, Ron enjoyed daily walks of three to four km. with little regard for the weather.
For the past 10 months Ron resided at Riverview Health Centre in the Personal Care Home on CD4. The family wishes to convey our heartfelt appreciation to the staff for his excellent care.
Due to the ongoing COVID pandemic a memorial service will not be held.