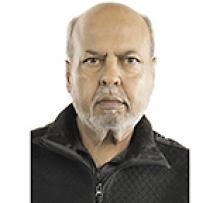 With heavy hearts we bid farewell to Shri Tarlochan Singh Saini. Predeceaced to his parents, Shri Kartar Chand Saini, and Sardarni Gurcharan Kaur. Tarlochan departed peacefully on Friday, December 24, 2021.
He is cherished deeply by his wife Kuldip, son Neeraj, and daughters, Neel (Jeet) and Preet (Rav).
Beloved husband, father, brother, uncle and grandfather. He was revered by his five grandchildren, Devun, Saiyah, Armaani, Gyaan, and Gyrvaan.
Tarlochan was born on June 10, 1951, in Urmar Tanda, Punjab, India. He was the second born of three brothers and three sisters. He married Kuldip, his wife of 47 years, on November 14, 1974. In December of that year, Tarlochan immigrated to Canada and started a family with a promising new life.
He began as an assembly worker with his older brother in a Fort Garry assembly plant before moving to a career in agricultural manufacturing and welding; a skilled trade he spoke avidly about.
In 1983, Tarlochan had dreams of becoming an entrepreneur, and went into a taxicab partnership which would eventually become a full ownership in 1988. Cab 053 thoroughly provided three beautiful homes within which to raise his kids and grandkids.
Well known throughout his community, he served as president of the Unicity Taxi board for two years, earning the respect and praise of his friends and peers until he eventually retired from driving in 2014.
His dedication to hard work and entrepreneurship reached out to multiple endeavours including ownership of Raj Jewellers for 20 years, and a short period of travel agency operation within Raj Travels.
Despite his success in business, he always found time for his ever-expanding family. His sense of humour, his love of local sports, and his beautiful yard and home became the center of all great celebrations for years to come, and still spoken of to this day. None of his accomplishments would ever tarnish his humility, generosity, and servitude to his Waheguru ji.
This presence has left an indelible mark on his community, for which he will always be revered as a man of truth, honour, and respect.
Funeral services will be held at West St. Paul Crematorium and Funeral Home, 92 Merit Street, West St. Paul, on Wednesday, December 29 at 1:30 p.m. followed by Akand Paat Sahib Bhog at Sikh Society of Manitoba Gurudwara Sahib.

He will live forever in our thoughts,
prayers, and laughter.