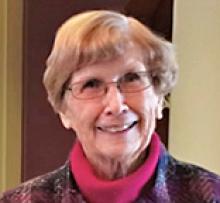 The life story for Shirley Christie begins September 16, 1929. She was the third of four children born to David and Isa Christie of Winnipeg. At the age of 16, Shirley and her sister Jean worked at the soda fountain counter in Liggett's Drug Store. Shirley served a banana split to a young man named Glover Anderson. They dated briefly, but due to Shirley's aspirations to attend university, they drifted apart.
In 1950, with a fresh Bachelor of Science degree and a new job at the Federal Seed Inspection Lab, Shirley started her first career. One day, getting some fresh air on her lunch break, she bumped into Glover, who worked nearby at the Manitoba Telephone System. This time the romance blossomed and they were married on June 21, 1952.
Their first daughter, Lee arrived in 1954 and Glover's job took the young family to Montreal for two years. Once back in Winnipeg, they purchased a house on Ash Street and welcomed Alan, Garth, John and Wendy to the family. Mom gave up her professional career to dedicate her time to raising her family. But she has a voracious appetite for expressing her artistic talent through a variety of crafts. Her abilities in knitting, weaving, rug making and crocheting were unparalleled. Every year saw multiple awards for items entered in the Red River Ex. There was a high demand for her creations at the Good Wool Shop, the Christmas Craft Sale and of course, her family and friends.
In 1959, Shirley and Glover were so inspired by the beauty of Lake of the Woods, they bought a lake lot. Building ensued over the years, with extended family pitching in and everyone enjoying lake life. Dinner for a dozen wasn't unusual - no easy task when you consider there was no power or running water in the early days. Shirley considered herself fortunate that, thanks to the efforts of her children, she was able to spend time every summer at her lake home.
Travel was another important part of life for Shirley. She enjoyed several trips to Europe and the UK as well as extensive trips coast to coast in the US and Canada. She and Glover had a group of friends called the Scatterpegs, who liked to travel together.
Sadness touched her life in 1980 with the loss of her son Alan. Glover passed away in 2000. She also lost her brother Dave, her sister Jean and her husband John Kresko.
When the house became too much to handle, she moved into the Canoe Club. She spent the last twelve years making new friends and enjoying the lifestyle offered there.
Shirley was a lifelong member of the First Church of Christ Scientist. Her beliefs gave her great strength and comfort throughout her life.
Family was her greatest joy. She leaves behind daughter Lee, husband Wayne Kear, granddaughters, Jen Kear, Colleen Kunderman, Brittany (Eric) Rensflet, great-grandchildren, Kane, Rorie, Natalie and Alex; son Garth, wife Andrea, grandson Tyler, granddaughter Brooke (Jared) Leray; son John, grandson Ethan; daughter Wendy, husband John Basic, grandson Matt and granddaughter Taylor. She is survived by her eldest sister Isabel Christie and sister-in-law Noreen Christie.
She was especially pleased to be able to cuddle her newest great-grandson, Alex, born September 5. But, due to declining health, she was sad not to be able to attend her granddaughter Brooke's wedding.
The family would like to express their appreciation to Dr. Brian Sharkey for his care over the years. He was instrumental in her staying in her own home for as long as she did, and in return, she did what she did best - knit him wool hats.
A private service will be held for the family at a later date.
In lieu of flowers, donations may be made to the First Church of Christ Scientist, 137 Scott St., Winnipeg, MB R3L 0K9, or contact csclerkwpg@outlook.com.