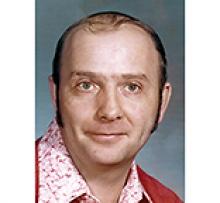 Bunny (Cecil Wayne) Small passed away on December 25, 2021, at the Dauphin Regional Health Centre.
He is survived by his brother Cliff Small of Dauphin, Manitoba, as well as 11 nieces and nephews. He was predeceased by his parents, Milford and Lillian Small, sisters, Muriel, Laura, Joyce, Ruth, and brothers, Glenn and Alex.
Bunny grew up with a core group of friends who loved sports. Ralph Wilson, a lifelong friend said it well, "If there was a game, we played it." He was a gifted athlete. As a 12 year old, his baseball team went all the way to the Manitoba finals. His skill as a first baseman was recognized by the Winnipeg press, who called him "Big Mitt," a reference to the large trapper he used. As an adult, when work allowed for it, he continued to play, ending his career with the Molsons of the Dauphin Fast Ball League.
As one would expect, Bunny also played hockey. He was a goalie, a good one. He played on various Dauphin teams, concluding his hockey career playing for the Dauphin Kings senior mens team.
Curling was his real passion. In high school he and his Dauphin teammates made it to the finals of the Winnipeg School Boy Championships, where they lost to Ted Bridgette. Continuing to curl for as long as his health allowed him to do so, he was active at the club level, bonspiels, zone and provincial play downs. He was well known and respected in Manitoba's competitive curling community.
Bunny was an excellent teacher, gifted at developing rapport with his students, and empowering them to see new possibilities. He was well liked and respected by students and staff. His career began in Altona, and concluded with him teaching in a variety of schools in the Dauphin area.
When their mother was disabled by a stroke Bunny and Cliff lovingly looked after her at home until her death years later.
Bunny loved dogs, and they loved him. He spoke Dog fluently. Dogs, many of them named Rex, were always part of the Dauphin experience. Pictures of all the dogs occupied a special place of honour above his computer.
Bunny was a superstar uncle who made his nieces and nephews feel special, loved for who they were. Always kind, generous, and fun loving, he was "easy to be around". He was an integral part of what made going to see Gramma in Dauphin so special.
Bunny will be remembered as a kind, generous, loving man. His passing has been a great loss to all who knew him. It has left a gaping hole in our hearts.

Cremation has taken place. A memorial will be held at a later date.