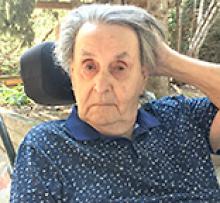 Georges always read the obituaries and told his family he did so to see if he was still alive. It is with deep sadness that we announce that he will not be reading this obituary as he passed away on Monday, December 13, 2021, at the St. Boniface Hospital at the age of 97.
Georges was born and resided in Saint-Boniface all his life. He was predeceased by his beloved wife Lucille (née Des Rosiers), his parents, Ephrem and Antoinette (née Joyal), his parents-in-law, Edmond and Marie-Antoinette (née Dubois) Des Rosiers, his brothers and sisters, Cécile (Léo) Lockwood, Samuel, Marie (Donat) Bilodeau, Marguerite (Léo) Poirier (Marcellin) Pierson), Rita (Aimé) Dupas, Joseph, Thérèse (Paul) Bétournay, Lucille (William) Pelland, Marcelle (Léo-Paul) Savaria, Henriette (Réal) Jubinville, Yvette (Terrence) McGuirk and numerous sisters and brothers-in laws, Anna Mulaire, Donat Des Rosiers, Emilien Des Rosiers, Antonin Des Rosiers, Jeanne (Gabe) Stragier, Rose (Léo)Des Rosiers, Fabiola (Gerry) Turcotte, Jean Des Rosiers, and Aline (Raymond) Desaulniers.
Georges is lovingly remembered by his children: Claudette (Greg Selinger), Lynne (Aurèle Thériault) and Paul (Heather MacDonald), his six grandchildren, Pascal, Eric, Geneviève, Zachary, Yanik, and Brianne, his great-grandchild, Mukwa Toupin-Chartrand, his sister Simone (Raymond) Smith, brothers-in-law, Réal Jubinville and Léo-Paul Savaria, as well as numerous nephews, nieces and friends.
Georges was known to many as a true craftsman in the world of construction. He leaves behind a legacy of solidly built commercial buildings and structures, houses and cottages in and around Winnipeg, Northwestern Ontario, and British Columbia. He particularly enjoyed working in First Nation and Inuit communities from Iqaluit to James Bay and from Brochet to Bloodvein. He started his craft at the age of 15 when he left Provencher School to join his father and his crew on the construction of the Fort Frances Hospital. He went on to work for companies such as Brown & Rutherford before starting out on his own after returning from military duty during the Second World War. His skills served him well during his military service while building radar stations on Vancouver Island. Although he was never formally educated in the fields of architecture and civil engineering, his curiosity, and a bit of guidance from his brothers-in-law allowed him to design structures for his clients that were readily approved by engineering and architectural firms.
At one point in his life, he and his business partner launched themselves in the hospitality industry when they opened and operated the Cartwright Hotel in southern Manitoba.
After retiring he and his wife, Lucille, cherished their time at their Engineer Lake cottage in Northwestern Ontario. It became their home away from home and generously received many family and friends. Visiting Mémère and Pépère at the cottage became a family ritual that created many cherished memories for their children and grandchildren.
Georges was as genuine and authentic as a person could be. He always took good care of his ten sisters. In his retirement years, he regaled us with stories of his adventures in the north that were filled with passion, gratitude and spiced with comedic elements that only he could tell. Although he wasn't the type of father who hugged or shed ongoing compliments to his children, his love for his children and grandchildren were expressed in his actions and his pride when he spoke about them to family and friends. You knew you were loved if he clasped your neck, squeezed your hand or teased you in his own subtle way.
We are all grateful for the time we were able to spend with our own personal legend. He created memories for us that will be passed on for generations and we are thankful for the time we were able to spend with him.
The family would like to thank to all the staff at Actionmarguerite (St. Boniface) for their care and compassion over the last nine years and the nurses and doctors in the Emergency Department at the St. Boniface Hospital for their kind and respectful attention to our father in his last hours of life.
A formal ceremony and interment will be held at a future date.
In lieu of flowers, donations may be made to Fondation Actionmarguerite, 185 rue Despins, Winnipeg, Manitoba R2H 2B3.