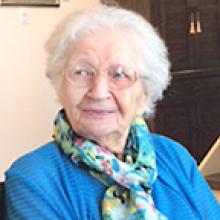 
In the early morning of December 27, 2021, Hertha Arnason, mother, grandmother and great-grandmother passed away in peaceful dignity.
She was born on July 9, 1916 to Ernest and Augusta Geisler in their home on the family farm in the R.M. of Siglunes, seven miles from Ashern. Her early years were spent on the farm. She attended Marne School and Ashern Central School. Together with her sisters, she enjoyed an active social life including recreational baseball.
In 1942 on October 18, Hertha married Lawrence Gudmundur Arnason. They started their married life in Winnipeg where Lawrence worked for the Mordue Brothers Funeral Home and their first son, Glen, was born in 1944. In 1946 the family moved back to Ashern where, together with Thorkell J. Clemens, they established Clemens & Arnason General Store and Clemens & Arnason Funeral Home.
Hertha worked at both the store and the funeral home. She continued to answer phones and order the flowers for many years even after her son Glen became the director of Arnason Funeral Home. Many people, no doubt, remember ordering flowers through her for their special occasions of weddings and graduations.
In 1951 Hertha and Lawrence had their second son Chuck.
Her life of 105 years, 5 months and 18 days saw many changes in the country and the world: World wars, pandemics (including Covid), telephones from party lines and operators to dial phones to cell phones, television from black and white to colour to satellite to internet, box cameras to a camera in almost everyone's pocket, from waiting for pictures to be developed to instant photos, from horse and buggy to cars with satellite radios, nineteen different Canadian Prime Ministers, 4 Kings and Queens, from mailing a letter to instant email and messages and even the right for women to vote.
She was an independent woman. It was only at the age of 80 that she consented to a move to a 55 plus apartment where she lived for 16 years before moving temporarily to the Lundar Personal Care Home and then to Ashern Personal Care home for her last years. She was an active member of the Grace Lutheran Church where she sang in the choir. She enjoyed the NHL broadcasts, first on radio and then on TV, especially if her son or grandson where playing. She was a very astute card player and remained adept at Skip Bo even in her 104th year.
Hertha was predeceased by her parents, Ernest and Augusta, her husband Lawrence in 1967, her daughter-in-law Carol in 2009, her sisters, Tillie, Olive, Alma and Emily, her brothers Rudolph, Leonard, Roy, Albert and Edward.
She is survived by her sons, Glen, Chuck (Leanne), her grandchildren, Aubrey (Graham), Tyler (Nicole), her great-grandchildren, Langston and Clara, her sister-in-law Antoinette Geisler, her godchild Sandra Falk, and many nieces and nephews in Canada and the United States. She will be missed by her family and the families of many of her friends who have lovely stories to tell of her time in their parent's lives.
The family is grateful to the caring staff at the Lundar Personal Care Home and the Ashern Personal Care Home where she was respected and well cared for in her last years.
Due to the ongoing pandemic, information on a memorial service to celebrate her very long life will follow at a later date.
Donations in her memory, if so wished, can be sent to the Lakeshore Hospital Guild, c/o Julie Bergner, Box 721, Ashern, MB R0C 0E0, or Ashern Personal Care Home, Recreational Use, c/o Darlene Hargot, PO Box 110, Ashern, MB R0C 0E0 or Grace Lutheran Church, Box 240, Ashern, MB R0C 0E0.