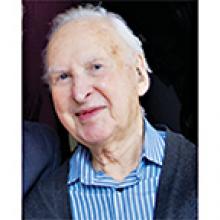 
Harry passed away peacefully at home. He was almost 99 years old.
He was predeceased by his wife, Bella, the love of his life throughout their 57 year marriage, by his parents, Doba and Louis, and his siblings, Esther Leven (Dave), Simcha (Tzipi), Adele Baker (Sidney), and Baruch. Harry is survived by his children, Sandra (Joe), Rochelle (Kevin), and Elliott (Nikki), and grandchildren, Jeremy (Andrea), Isadora, Mikaela, Simon, Avery, and many nephews, nieces, and cousins.
Harry was born in Winnipeg and cherished his memories of the North End. He attended St. John's Tech, and graduated from the University of Manitoba with a BSc/Pharmacy degree. Over his 35 year career, he owned Dominion Drugs and Lipton Pharmacy, where he created a warm and welcoming atmosphere. The soda fountain lunch counter became a community meeting place.
Harry met Bella on a blind date and he always said that his life began when he met Bella. Their lives were blessed with family and friends, many holiday celebrations and dinners. To his children and grandchildren, Harry was a dispenser of knowledge and family history; he was an advisor, an intellectual and his opinion was respected. He derived great pleasure from the accomplishments and activities of his grandchildren.
Harry was deeply committed to his Jewish roots and to the Talmud Torah Synagogue. He was equally committed to fitness and healthy living. He worked out in his home gym daily, and enjoyed golf, curling, baseball and lawn bowling.
Harry was a loving and true-life partner to Bella throughout their life and during her illness. Following her passing, he continued to lead a full and productive life. He was engaging, vital, and had an impeccable memory. He was always inquisitive, thoughtful, and up for a thorough debate or discussion. He read the Winnipeg Free Press and The Globe and Mail cover to cover daily. He also enjoyed fiction and non-fiction books.
With the devotion of his caregivers and Dr. Cynthia Sawatsky, he was able to live vibrantly and independently in the home that he loved until he passed.
Donations in Harry's memory may be made to the Bella and Harry Garfinkel Memorial Fund at the Jewish Foundation of Manitoba (204-477-7525).