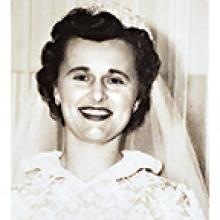 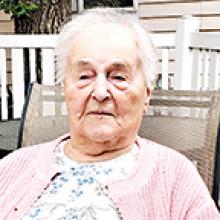 
It is with profound sadness that we announce the peaceful passing of Millie at the age of 99. After a life well lived, surrounded by her children, Mom has been reunited with her husband, parents and brother.
Mom was predeceased by her husband John, her brother Rudy; her parents, John and Irene Czechnita; in-laws, Peter and Vera Babiuk; sister-in-law Anne and husband Ed Konarski; nephew-in-law Donald Konarski, brother-in-law Bill and wife Joyce, sister-in-law Olga and husband Tom Dovyak. She will be lovingly remembered by her daughter Susan (Jacques) Lemoine, granddaughter Danielle (Andrew) Wilkins and great-granddaughter Zoey; her son Bruce (Marianne) and granddaughters, Lauren and Kristen; her son Gary (Melanie), grandson Kyle (Sarah), granddaughter Lynne (Chad) Parker and great-grandson Easton and great-granddaughter Rylee; and sister-in-law Dorothy (Peter) Nowicki and a few cousins, nieces and nephews.
Mom grew up in East Kildonan in Winnipeg and once she finished school she worked at Eaton's for 12 and one-half years. She worked in the sewing department and then in the cash cage. That is when she met our father, John Babiuk. They married on October 23, 1954. Dad was a farmer so it would be a different kind of life for Mom. They were married for 50 years. She learnt to do everything on the farm from separating the milk to make cream, planting a huge garden, cooking meals to be taken out to the field when harvesting was going on to even operating the tractor for baling. It was a hard life but fulfilling and she never complained. Once we were a little bit older, she got part-time jobs to help supplement the income from the crops. She worked for Knit-Rite stitching the patterns on the back of the big tundra sweaters; Ideal Donut for about three years and the Ramada Inn for about five years as a banquet server. She enjoyed all those jobs and met many friends along the way.
Mom and Dad sold the farm in the early 1980s and bought a house in Ste. Agathe. They lived there until 1998 when they moved to Summerland on University Crescent. Mom was diagnosed with macular degeneration so Dad was her eyes for most things. However, even with her limited vision, she didn't let it stop her. While at Summerland, she enjoyed playing cards, shuffleboard and bingo. Mom had her own set of bingo cards from CNIB and played the same cards all the time. After Dad passed away in 2004 Mom had to adjust to being on her own with her limited vision and she did quite well. Eventually as she got older, things became more difficult for her where she could no longer stay on her own so she went to Thorvaldson Care Centre. Again, with her limited vision, she adjusted miraculously. With the help of her walker and once she knew her route, she could get herself to the dining room for meals and with some guidance go to the recreation room to play bingo and listen to a concert. She loved to listen to the singing.
Mom also enjoyed the visits from her children and grandchildren. When she was at Summerland she especially enjoyed the visits where we would play the card game Ticky. When she moved to Thorvaldsons, she looked forward to visits from family and friends and especially if any of the grandchildren and great-grandchildren came to see her. She also enjoyed the visits from Gary and "Charlie" (his dog). Charlie was so good with Mom and the other residents. Mom would save her hard-boiled egg from her meal to give to Charlie and of course Charlie didn't complain.
Mom had her ups and downs with various medical issues and finally on October 12 she landed in Victoria Hospital because she was unable to walk. Mom lived a full life but her body was slowly deteriorating. As hard as it was for all of us to let her go, she went out on her terms; she did it her way. Knowing that she was no longer suffering and in pain makes it easier to bear.
Cremation has taken place and a private family interment will take place at a later date. Words alone cannot express the heartfelt thanks to the staff at Thorvaldson Care Centre who tended to Mom during her five year stay there. It was very much appreciated. The family would also like to thank the doctors, nurses and staff of Units 5 South and 4 South at the Victoria Hospital, as well as the MAID team for their compassion, care and support.
Should anyone wish, donations may be made in Millie's memory to the CNIB Foundation.


We will miss you Mom with all of our hearts. Say hi to Dad for us.
THOMSON "IN THE PARK"
204-925-1120
Obituary may also be viewed and
condolences may be sent to
www.thomsoninthepark.com