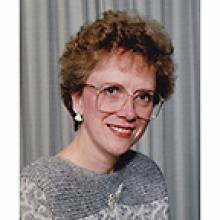 
Wilma's funeral service was to be held at 2:00 p.m. today - Saturday, January 8 at St. Margaret's Anglican Church. IT HAS BEEN RESCHDULED TO FEBRUARY DUE TO THE PANDEMIC. TENTATIVE DATE SATURDAY, FEBRUARY 19. Committal of ashes is planned for Mother's Day at St. John's Cathedral where she was married.


A Life
She was our North, our South, our East and West,
Our working week and our Sunday rest,
Our noon, our midnight, our talk, our song;
WH Auden


From a fog of grief and sorrow, we announce the death of our beloved wife, mother, grandmother, sister, and friend. After a long and difficult illness, she died peacefully at home. All who knew her loved her. She is survived by her husband Dr. JL (Larry) Reynolds; children, Liz in Winnipeg, Matt (Petra) in Brandon and Sarah in Toronto; grandchildren, Lia, Jake and Amara and brothers, Walter (Marilyn) and Ron (Lynne) Braun of Morden.
Wilma grew up in a loving farm family in southern Manitoba. Early on she learned self-sufficiency. Her father, a Mennonite refugee from the Russian Revolution, taught her that she could make two dresses for the cost of buying one from the catalogue. This was the genesis of her lifelong love of sewing, fabric and fashion.
After Bible school, she graduated from the St. Boniface School of Nursing and worked in ward medicine and ICU. There she met a young resident, Dr. Larry Reynolds. After a whirlwind romance they were married. Over the next 46 years, she tried unsuccessfully to tame the whirlwind that is Larry.
As a sweet, creative mother and grandmother, she created wonderful feasts and events. The famous pirate ship cake topped with rice paper sails was a favourite. Halloween costumes and Sunday school pageant costumes were carefully sewn. An elaborate Victorian doll house was built, her beautiful slender fingers blistered from the glue gun. Extravagant gingerbread projects with the grands were memorable.
The long annual drives between southern Ontario and Clear Lake gave her a chance to listen to her children's hopes and fears. The year they turned 13, each child had a special trip with mum to a place of their choosing. All this and mum keeping watch over sickbeds are part of a silver web of memories she has left to us. To the very end she gave everything she had to her family. Her grandchildren were a profound source of hope and joy especially during the time her health was in steep decline.
Wilma was the pianist at her country church, she continued to play the piano and later the organ for church and choirs. Her skill as an accompanist was admired as she carefully read the performer and supported them with her playing. Wilma always made others shine. Two refugee families one from the Vietnamese exodus and one from Zimbabwe made their successful transition into Canadian life helped by her dedication and patience. They too fell in love with her.
In the late 1980s she discovered a new species of humanity: smart, beautiful and super powered. Some call them quilters. Her quilts symbolized warmth and the good, the true and the beautiful. They form a part of her great legacy. These women became lasting friends and a very present help in times of trouble.
In her family Wilma was the only girl but she acquired a collection of adopted sisters: Pat, Arlene, Carol, Vivian, Joy, Doris, Sandy, Norma, Yolande and Ruth.
In the Reynolds' homes in Winnipeg, Oxford, London and at the Clear Lake cottage she created places of nurture and sanctuary. Always able to put people at ease she was a gifted hostess entertaining friends, health care staff, and several generations of medical students and residents.
From an early age she was a person of faith. She waged a peaceful war against cruelty through her commitment to love and patience and grace. Her suffering and that of those she loved sorely tested her. Wilma never preached but her life was a testament of the Gospel of Love and Grace. All her little acts of kindness and of love now echo on into eternity.
Her experience of our imperfect health care system was often difficult. She was blessed with some great family physicians, K. Picard, S. Kredenstser and R. Johnson. Her rheumatologist Dr. T. McCarthy was a great friend. The many moments of compassionate care were unfortunately mixed with serious medical errors and a few acts of searing neglect and indifference. Even her vast capacity for forgiveness was taxed at times. The care given by her palliative nurses was achingly beautiful. Thanks to Dr. Mike Harlos and his team who helped to build excellence in our palliative care program.
Despite her Anabaptist heritage she was a remarkably great card player. Wilma sadly lost her long battle with remote controls and her pink password note book was alas only ornamental.
If a good death is possible, she had one. In her beautiful home, under a quilt of her own making, she was surrounded by people and things she loved. A great cloud of witnesses from this world and the next kept a Holy Vigil over her. Wilma navigated the thin and sacred space between earth and heaven with characteristic grace, patience and flashes of humour. Music, murmured prayers and the ancient songs of an exiled people hymned her to her rest.
Flowers are welcomed or donations in her memory to St Margaret's Church, Mennonite Central Committee or Harvest Manitoba.


"But the effect of her being on those around her was incalculably diffusive: for the growing good of the world is partly dependent on unhistoric acts; and that things are not so ill with you and me as they might have been is half owing to the number who lived faithfully a hidden life, and rest in unvisited tombs." Middlemarch.
Richard Rosin
Funeral Director Ltd.
204-219-1126
richardrosin.ca