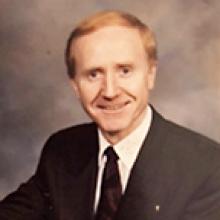 
Casey Kehoe, beloved husband, dad, and gramps, passed away peacefully at home in Edmonton on Friday, January 7, 2022.
Left to cherish his memory and mourn his passing are: his loving wife of 46 years, Jan; daughter Megan and granddaughter Naomi of Edmonton; son Justin of Edmonton; three sisters, Sr. Terry Kehoe OSB of Winnipeg, Berny Birchall of London, ON, and Agnes (Wally) Budy of Selkirk; sister-in-law Helen Kwiatkoski of Selkirk; and numerous cousins, nieces, and nephews. He was predeceased by: parents, Paul and Mary; two brothers, Joe (Lillian) Kwiatkoski and Stan Kwiatkoski; four sisters, Fran (Joe) Murray, Vicky (Alf Sanford), Helen (Andy) Traen, and Rose (John) Hoplock; brother-in-law, Bud Birchall; special uncle and aunt, Carl and Helen Kwiatkoski; nephew, Brian Birchall; and two nieces, Cecilia Stebeleski and Jennifer Fox.
Casey was born in Vita, Manitoba in 1942. His childhood was spent in Tolstoi and then East Selkirk. He graduated from Worsham College of Mortuary Science in Chicago and then worked as an embalmer and funeral director for most of his life. In 1975, he married Janice Foreman. In 1981, he and Jan moved to Camrose, AB where Casey operated Mount Pleasant Funeral Chapel for 21 years. He was dedicated to his profession. In 2002, when he retired, he and his family settled in Edmonton.
Casey was a fourth degree member of the Knights of Columbus and a faithful parishioner of his Church, serving on the parish council and in the music ministry. Helping people in need is what he did best. He served on the board of directors for St. Mary's Hospital, Camrose Food Bank, and Camrose Chamber of Commerce.
Casey was a compassionate, kind, generous gentleman. He was a loving husband and father. Courageously, he lived with Parkinson's disease and had a positive attitude to life. Whatever he did, he did to the best of his ability.
Mass of Christian Burial will be celebrated on Friday, January 14, 2022 at 11:00 a.m. in St. Stanislaus Catholic Church, East Selkirk, with Father Carl Tarnopolski presiding. Interment in East Selkirk Cemetery.
Memorial donations to St. Stanislaus Church, Box 92, East Selkirk, MB R0E 0M0 or to the East Selkirk Cemetery Fund are greatly appreciated.