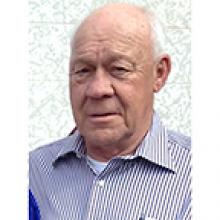 
With sad hearts and wonderful memories, we announce the passing of Benoit on January 6, 2022, after a short battle with cancer at the age of 76.
Benoit will be dearly missed by his wife and best friend Denise, of more than 56 years. He is survived by his children: Marc (Denise), Doran (Carmen), and Suzanne; grandchildren: Alanah, Alexandra, Kennedy, and Titus, and step-grandchildren: Trinity and Vaughan.
Benoit will be lovingly remembered by his siblings, in-laws, nieces and nephews and friends.
He was predeceased by his parents: Frederic and Alice; his sisters: Anne Marie, Thérèse, Gisèle, and Edithe; his mother and father-in-law: François and Marie Marion; and his brothers-in-law and sisters in-law.
Benoit was born in Ste. Rose du Lac and grew up in Ste. Amelie. He later moved back to Ste. Rose, Lynn Lake, Leaf Rapids, Neepawa where his love for the automotive industry began as a mechanic, service manager, and business owner. This evolved into his love of collecting and owning automobiles. After acquiring his private pilot license, Ben became an avid flyer and enjoyed many hours in the air. He had a love for sports, including baseball and hockey, as a spectator, a coach, and a manager. Even later in life, this love continued, as he enjoyed watching sports on television. Benoit was involved in many community clubs for most of his life. Ben eventually would move to Winnipeg where he settled for his retirement. In his newly found spare time he became quite the poker player and attended games and tournaments regularly.
One of Ben's greatest joys was spending time with his family, in particular, his grandchildren. He will be fondly remembered for his patience, calm demeanour, willingness to help, and dry humour.
As per Benoit's wishes, there will be no funeral service. Cremation has taken place.


Family and friends may sign a book of condolence online at www.desjardinsfuneralchapel.ca.