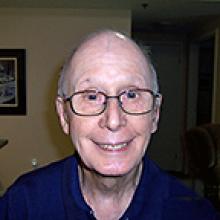 
It is with sadness that we announce the death of our beloved husband and father, William Mazur, aged 87 years, on January 7, 2022.
Bill grew up in Kirkness, east of Lockport. After completing his grade eleven at Gonor School he remained on the farm. In 1956, after deciding not to pursue farming as a career, he completed his grade twelve in Selkirk where he met his future wife, Jeanne.
Bill was a hard worker and continued to further his education after he was married to better provide for his family. After many years as the Business Office Manager/Accountant at the Taché Nursing Centre (Actionmarguerite), he retired in December 1994.
Bill enjoyed watching sports on TV and attending the Moose, Jets and Goldeyes games with his sons. He loved to dance and never passed up the chance to polka at a wedding or social.
Bill is survived by his wife of 62 years, Jeanne; his sons, Jeff (Michele), Brent and Blaine; his brothers, Laurence (Jeannette), Ted (Marlene); sister, Leona Mazur; Jeanne's sister, Carole and her husband, Len Bacon, who were so helpful to us; several nieces and nephews.
Bill was predeceased by his parents, Harry and Katherine Mazur; his brothers, Richard and Melvyn; sisters, Evelyn and Carrie; his in-laws, Walter and Olga Zalubniak.
A sincere thank you to the staff at Health Sciences Centre and the Geriatric Rehab unit at Seven Oaks General Hospital for their compassionate care of Bill.
At the request of the deceased, there will be no service. Cremation and a private burial have taken place.
If friends so desire, donations in Bill's honour may be made to a charity of your choice.