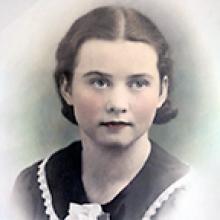 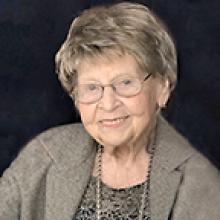 
With immense gratitude for a life fully lived, the family of Irene Milne announces her passing on December 20, 2021 at Grace Hospital in Winnipeg.
She will be lovingly remembered and dearly missed by her four children, Marilyn Sime (Ken) of Winnipeg, Kathy Wiese (Ken) of Hallock, Minnesota, Eleanor Thompson (Dudley) of Winnipeg, and Robert Milne (Joanne) of Emerson, as well as 10 grandchildren and 12 great-grandchildren. Irene also leaves to mourn two sisters, Genevieve Manikel of Winnipeg and Margaret England of California, as well as numerous nieces, nephews, cousins and friends.
Irene was predeceased by her husband of 67 years, Ian Milne; by sisters, Ruth Milne and Bernice Bedsworth; brothers, George McClelland and Lorne McClelland; and by her parents, Tom and Ella McClelland.
Irene and Ian were married on June 15, 1940 and lived and farmed in the Emerson-Marais district for 65 years. They were able to remain in their home on the farm until 2005 when they moved to an assisted living facility in Winnipeg. Irene had a special talent for music and studied formally in her local community and then at St. Mary's Academy in Winnipeg where she completed examinations to become a registered music teacher, receiving the Associate of the Toronto Conservatory of Music (A.T.C.M.) Diploma in 1939. She started playing the pump organ at Aux Marais Methodist-United Church, close to her parental home, at the age of 11 when her feet could barely reach the pedals. As Irene and Ian raised their family and farmed, they were fully engaged in the life of the Emerson-Marais community where they formed lifelong friendships. Irene was instrumental in organizing the Post Road Heritage Group that is still active today and served on many committees in southern Manitoba that worked for the preservation of local history. She and Ian were also active members of St. Andrew's United Church in Emerson and the church was a central part of Irene's life, whether it was teaching young people, attending study groups, welcoming new ministers, or participating in outreach work. Irene was organist at St. Andrew's United for over 40 years. She taught music for many years and was honoured to have played for hundreds of weddings, funerals, church and community choirs and social events in the Emerson district. Irene was a trained classical pianist and accompanist who loved playing Bach, Beethoven, Chopin and Debussy but could also play anything by ear and could transpose to any key without missing a beat. Her remarkable gift of music was a source of inspiration and solace to her family and to all who knew and loved her. She shared this gift with others over her entire lifetime with grace, humility, and endless joy. When she and Ian moved to Dakota House, Irene accompanied the seniors' choir for 12 years prior to her move to Meadowood Manor where she continued to play to the delight of the residents and many of the staff right up until two weeks before her death at the age of 102.
We cherish Mom's love and respect for people and for life, her determination and resilience, her sense of fun and humour, her practicality, her deep faith, and her belief that change and equality for all are possible if we work together. Her love for her children, grandchildren, and great grandchildren, for her extended family and community knew no bounds. Her passion for music, for history, for social justice, and for the power of shared community will live in our hearts forever.
The family wishes to thank the wonderful first responders and ambulance personnel and the compassionate and competent medical staff at Grace Hospital for your exceptional care of our beloved Mom.
In keeping with Mom's wishes, cremation has taken place. A celebration of Irene's life will be held at a later time. We invite family and friends to sign a book of condolence online at www.neilbardalinc.com.
In lieu of flowers, donations in Irene's memory can be made to the Post Road Heritage Group, Box 71, Emerson, Manitoba ROA OLO, or St. Andrew's United Church, Box 127, Emerson, ROA OLO or a charity of your choice.